Sun squint and endless brown sand
beach, kind of velvety, soft, powdery and it
is sculpted by our foot prints.  Are we anywhere?
A hotel that feels like the end of the road in El
Salvador.  The sunset is indirect, the ocean is not
the Pacific, facing due west, this is Golfo de
Fonseca where Sir Francis Drake buried
treasure on deserted islands and Nicaragua and
Honduras fight for territory.  El Salvador, quiet and
well-behaved, won the battle for islands as settled
by the UN.  Well-behaved.  This country still
so scarred from the Civil War.  My backpack
contains a copy of "Guerrillas of Peace" so I can
learn about Liberation Theology and Catholics
who allied with the poor.  The guidebook told
me that Oscar Romero was killed while he preached
in a chapel at a cancer hospital.

But we're in a hotel, a backpacker's hotel, that at least
also hosts a multitude of El Salvadoran families as they
lounge in hammocks, and suck on beer on a Sunday
afternoon.  Looking for context, looking for El Salvador
we squint at the sun and let our footprints be sculpted
into the sand, washed away by receding tide.

A short ways we spy two restaurants.  Brightly painted
porches, an outdoor grill, and no tourists.  Smelling something
promising, we wander closer to look for menus.  This type
of beach-side haunt has no menus.  Everyone knows what's
served-- except for us.  We wander further and find a map
of the neighboring estuary.  Promises of animals and
fallen trees.  Markers of something hidden and known.

A camper is parked by the estuary and a couple
grills food under an umbrella.  Children play in the water,
parents fish for the meal.  We scramble over barnacly
rocks and skirt a cave with a figure hidden in its shadows.

A father holds his baby under mangrove shade.  The end
of the line, before the beach is eaten by plant growth.
Before reaching the end, we turn back.  Approaching,
two men dressed in all black: pants, hoodies, heavy metal
(I think) tee-shirts.  They walk wide so we can't pass them.
I smile and say "Hola" in an attempt to disarm.  Kevin already
knows, he is pulling the backpack off before we even
see the glint of the gun.

Silver revolver at the base of the hoodie.  I speak Spanish, but
I now joke that it's broken.  The El Salvadoran accent, mumbled,
gargled in the back of the throat, soft, almost Caribbean--
I understand enough but I can't respond.  Kevin has given the
bag and the skinny man is now going through the contents.
Unimpressed with a guidebook, Guerrillas of Peace, my book on
Guatemalan shamanism, my papers from yoga retreats.  He
finds the camera, brows raise between the two robbers.

We're being asked for money, but all our money and passports
are back at the hotel.  The only items of value to anyone
but us are the camera and iPhone.  The iPhone is only there
to tell time.  It's spotted.  In some ways, I'm relieved.  At least
it has monetary value.  Maybe it will spare us as there's no money
to give them.

The gun is raised again to remind us to give what we have.  It
doesn't seem real.  I'm still squinting in the sun.  Wearing a
bathing suit and tee-shirt.  There are families behind us, in front
of us.  The restaurants are full.  And here we are in a small
patch of sand making a known transaction.  Our backpack
for our lives.

These two look like Jesse's friends on "Breaking Bad."  The
gun-bearer is light-skinned, heavy-set.  I can't place the character he
reminds me of, but he seems brighter.  We both comment
later that he didn't necessarily seem sociopathic but
he definitely didn't care.  There was no emotion.

The skinnier one offers us any important papers in a moment
of generosity.  I don't have the clarity of mind to differentiate
what's important.  I just want to be alive and gone.

They begin to walk away with our backpack.  Load
lightened, we walk straight back to the hotel.  Our
hotel room key was taken in the robbery.  As I explain
to the desk clerk what happened, tears emerge.
Slightly embarrassed, I wipe them away.  He is stunned.  I'm
an invited guest.  There's a hope that I'll lead yoga
retreats here in the future.  Obviously, all of that is dashed
and I just want to return to my room, to the space
that's temporarily mine here.

I rush straight to the shower and only realize that was
my strongest impulse later.  Soon after, El Salvadoran
police knock on the door, also wearing head to toe black, toting
machine guns and knee-high boots.  We give our descriptions
(omitting "Breaking Bad" references).  No one recognizes
these guys in this small, end of the road fishing village.
They must have come in from out of town.  We begin to
suspect that we were targeted as we looked at the estuary
map.  Followed.

We begin to piece together the inklings of fear we felt.  Sideways
glances at the restaurant.  Kevin asking me if I'd brought
my passport.  He realized he wouldn't have asked if he didn't feel
a tinge of worry.  I think of "The Gift of Fear," a book that
urges the reader to heed those fears, usually born out of unprocessed
signals.  Where did that person emerge from?  Why would they
be here?  Our fear is usually rational.

And we learn too that most in this village experience no fear.  There
hasn't been a robbery in years.  (Yet, Kevin read that gun
ownership is high.  There is worrying gang activity in both El Salvador and
Honduras.)

I want to leave, but I'm shaky.  With no guidebook and no
internet access, I'm unsure of where to go and how to get there.
I don't want to travel while I feel so nervous.  I can't change
the home-bound flight.

So we stay.  And as we stay, we relax (some).  We swim
in the Golfo de Fonseca.  We spy fellow travelers who we
previously met in Boquete, Panama, four years prior.  We make
new friends with Canadians fresh from a fishing boat from Honduras.
We learn about turtle preservation.  When we finally
venture into town proper to withdraw cash at an ATM we feel
nervous.  Is there a reason for our fear?  It's hard to see
El Salvador uncolored by the moment at the beach.

I wanted to read about Oscar Romero and the Civil
War within the borders of these stories, these experiences.
The book was stolen at gunpoint on hot sand.  Oddly, I'm comforted
thinking of the pirate activity that took place on these same
shores.  Of all those robbed, of the quick shifts of power, of
finding haven again.

I want to know El Salvador outside of that moment, but
the duration of my stay lives on its periphery.  The better
moments were moments of recovery or anticipation.  The
more fraught moments directly after.  The shock and
disbelief live in the center.

A latent sexism, a training crops in Kevin and he apologizes
for not being able to stop the robbery.  In truth, he
handled it so well, he kept so clear on how to keep
us safe.  In reality, he did protect.  We begin to list our
losses.  It becomes a joke to not have photos of El
Salvador, as both camera and iPhone are now in
robber hands.

Our El Salvador is now the room, with its maritime
maps of our little gulf, the hammocks under the swaying
coconut trees, and the patch of ocean within view of the
hotel.  Back and forth across our little El Salvador.  And
I start to wonder about fear creating imperialism,
capitalism, the various ills that coalesced into
brutality, oppression, and wars.  I press feet into
sand and remember crime statistics-- El Salvador is
largely safer than the US.  I hold onto the awareness
that generally shepherds me throughout the world.

I won't be scared of the world.  I squint into
sun.  There are losses and moments and fears
to keep us humble.  Eyes closed, flashes of gun
against light.  Eyes open, a man scales a coconut
tree, unharnessed.  A few coconuts drop
to the brown sand.  The waves lap up snails
drawing mosaics on the earth.  Paradise is troubled.
Posted by Maiga Milbourne at 6:53 PM 2 comments:

I've been out of the country for awhile, which is why I've been oh so quiet.  Shortly before leaving to run two yoga retreats in Guatemala, and then take some rest in El Salvador, I was invited to read some of my poetry with other badass women in Manhattan's Lower East Side. 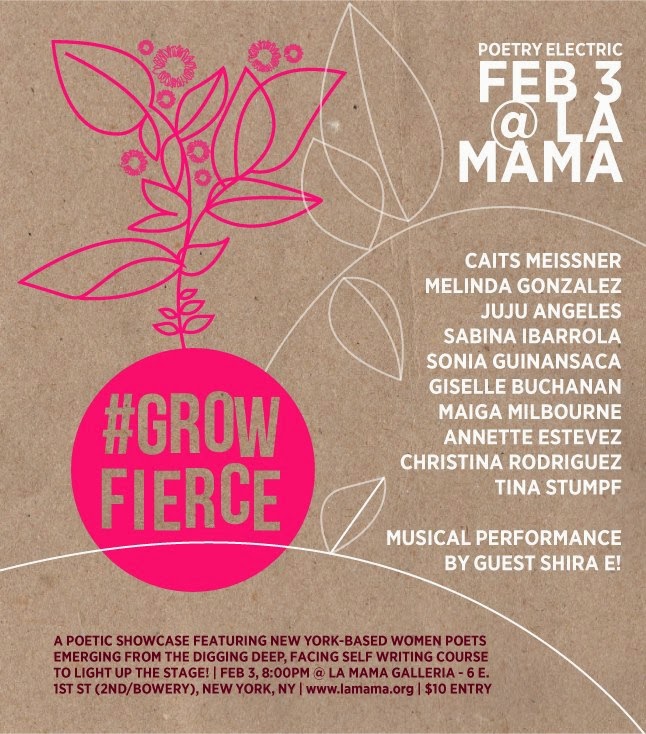 I am thrilled to share the stage this upcoming Monday evening!  I'm still unpacking, doing laundry, but I'm also selecting my pieces and doing some run-throughs.  Catch me tan, nervous, and exhilarated.
Posted by Maiga Milbourne at 5:29 PM No comments:

Email ThisBlogThis!Share to TwitterShare to FacebookShare to Pinterest
Labels: poetry

I cry when thousands cheered, unceasingly, as Mandela left prison
I cry when Lynn Stewart walks off the plane, and out of jail
I cry when their struggle represents all of our struggle
I cry because they know a taste of freedom, and through them, so do I

I don't understand partying at the end
Why is New Year's Eve the exciting moment?
For me, when dawn breaks on New Year's Day
I feel renewed.
The light returns, the potential is here.

Why celebrate the end, the nostalgic, the sentimental,
the reflection?  Why not save your energy
for what we create in our cauldron of revolution.
Tend the flame, feed the stew your tears.
I cry at the realization of our own unbreakable power.
I cry knowing that we rise like the sun.
Posted by Maiga Milbourne at 2:51 PM No comments: