Mud and the New Year

I stomped around in the mud. I did some other things too, but today, one of the best bits was muddy.

It's a Sunday so I woke up at 6:30 am, chased my cats around, ate some oatmeal, and went to teach 8 am Jivamukti yoga. This is what happens on Sundays. I really love teaching this class because I get 90 luxurious minutes, which means I get to include a more well-rounded practice. When I trained with Jivamukti they taught us 14 points to include in any official Jivamukti class. I thought, "alright, I'm game." And then I started teaching them. And I watched students bodies really open up. I watched them emerge from meditation and savasana noticeably more peaceful.

So I love teaching this class because I get to offer what I was taught and watch how wise it is, how much it serves.

I also had almost a week where I didn't teach, which hasn't happened in some time. I taught the day before Christmas Eve and then almost didn't teach a week. I say almost because I did teach a private client last Wednesday, between Christmas and New Year's Eve. Still, a big break. I was really glad to come back to teaching. It felt really nice to be with people in that specific way.

Kevin and I decided that after I taught we'd head up to Bald Pate Mountain, near New Hope, PA. Earlier this year he visited this fantastic permaculture spot called Fields without Fences in the area. Some of the folks living up there said Bald Pate is some of their favorite hiking. On New Year's Day Kevin and I headed up and everything was closed. Initially, our arrogant white people training kicked in and we thought, "we can still hike! They can't close the mountain!" And then we started seeing hunting signs. RIGHT! Never mind. We found another nearby hike where we were at less risk of errant gunfire.

We read online that Bald Pate is open every Sunday year round so we decided to head back today.

I've been hiking since I was a kid and I have a pretty good sense of navigation. Unfortunately, these two features of my experience have sort of coalesced into me having an unfounded sense of confidence and less reliance on maps. Kevin is still fooled by my confidence, which is unfortunate.

We set out on a 4 mile loop up to the lookout on the Delaware River. We made it and it reminded us of all sorts of things. It made us think of how we imagine that region to be 60 years ago. It reminded us of places we've been-- the landscape, the plantlife, the random Europeans on the trail. We smiled and told jokes and splashed mud on each other. We stood in the sunshine on the summit and decided we'd do a secondary loop on the way back. In a moment that would be foreshadowing were this a novel or a movie and not us in real life, Kevin said that his bud Mike usually takes a photo of trail maps. "Oh, but it's simple!" we both thought. So well marked!

So we began following the red blazes for our little loop. We knew that when we hit white, go to the left. What could possibly go wrong?

Red blazes came to a crossroads with white signs with arrows in them. It's white, right? So we go left. Forrested mountain trail became a field under telephone wires. We wound back into woods cordoned off with blue rope, as part of the trail had fallen into a gulley. Kevin started talking about everything that could possibly go wrong. I think our ultimate fate would be to be eaten by bears. I was still sunnily confident. Eventually, we'll see someone! We'll find a road! Kevin said his concern was largely a reflection of me. I think he thinks that I won't survive in the wild. Likely true. 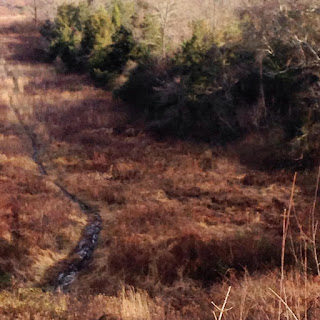 We came to a road and then we came to more white blazes. We looped back to the telephone wires. Ultimately, we found our fateful too soon left onto the white trail with arrows. Apparently, white with arrows is very different from simply white!

Finally, a few miles and vertical switchbacks later, we found the main trail. With the blissfully white blaze. A runner passed and I asked, "is the parking lot this way?" He confirmed, in his French accent (seriously, Europeans in full force!). Kevin said, "why are you admitting that we don't know the way?!" And we talked about the areas each of us is overly confident or proud. Basically, it boiled down to I felt like the mountain was wrong and Kevin felt like we were wrong. (The mountain was obviously wrong! Poorly marked! This is no reflection on me.)

We stomped around in the mud. We argued and talked and laughed. We're both really happy.

A week before the winter solstice, I started feeling things. I feel things all the time, but I often don't listen. This time, I listened. I felt a little grouchy and something in me said, Meditate. I'd been thinking that I should make an altar but part of me is always dismissive, like it's too woo woo a thing to do. But the whole point of making an altar is to do something different. You make a cleared away space. You tend to it. These actions benefit you. So I ignored the part of me that witholds and I made what was an altar when I was a teenager, and more recently a set of shelves, once more into an altar. I cleared the excess stuff away and put in the items that feel significant. Shoot, I never knew where they should live anyway. They live in the altar.

Once I had done this, I felt ready to meditate. I did.

As I meditated, something in me said, "Write a love letter to yourself." As soon as I heard this, tears ran down my cheeks. So I knew it was something. I knew I should do this.

When I concluded the meditation, I sat down and wrote a love letter to myself. I wrote to myself all the things that I respected. I remember the main thing I kept telling myself is that I see how hard I try to do the right thing. I see the struggle to do the best that I can, even though I often feel so muddy or confused. That there's intention there.

About a week later, it was the winter solstice. I had taken the day off as this is a thing I'm trying to do each week. Be off. Completely. I saw an article on rituals to do on the solstice and I printed it out. It said to do some type of physical activity for 40 minutes that raised your heart rate. I went outside and ran. Afterwards, it said to write responses to questions about how the past few seasons had gone. It asked about what I felt or thought during the past winter or spring or summer or fall. I began remembering last winter. Last winter was a period of grief. There had been quick, successive, hard hitting loss. It was raw grief. I remember how it felt. It felt much different than I had expected. In some ways, it wasn't as bad as I thought grief would be. It was simply different. It was a space of intimacy with those I'd lost and those who remained that I hadn't expected. I didn't have space to hide what I felt in that season.

It was followed quickly by spring and spring's relentless activity and overwhelm. And of course, the joyful introduction of the new group of cats in our life. The summer was a lot of travel and professional development that continued into the fall.

I realized that purpose has and continues to feel present in my life. I still work on solid financial stability and the biggest piece I'd like to work on is having more faith: trusting myself, trusting in general. I did some yin poses to stay in my body. I offered some fruit to the earth in thanks. I burned the writing I had done. I felt like I made peace with the changing season.

By the time New Year's Eve rolled around I felt done! I've never really understood New Year's Eve. I'm not a partier. I'm not an extrovert. This sometimes confuses people because I do value relationships in my life. I define introverts and extroverts based on where you source energy. While I really love people and my relationships, I need time by myself to replenish my energy. If I'm around people continually, I feel sort of depleted. I read an article on New Year's Eve that it's an extrovert's holiday. I think so! It feels like one last debauched dance before something ends. To me, New Year's Day seemed the thing. I like mornings, I liked new beginnings. I've always felt the beginning is the thing to tend to, not the end.

I had a nice New Year's Eve though with friends that I really value. New Year's Day, Kevin and I decided to go on a hike. It has been a big season of family and travel and holidays so quiet time outdoors felt right. We realized we shouldn't get shot at on Bald Pate Mountain, so we found a few other hikes in the region. As we wandered around in the woods, I thought about resolutions. My reflections and observations on the Solstice felt really good. It felt like seeing where there was imbalance in my life and setting intentions towards finding center again. Maybe that's a resolution: restoring equilibrium. Towards those ends, yes, continually work on financial stability, continually work on faith in Self. And be outside more, I thought. Kevin concurred. The hikes should happen more often. We're thinking once a month, minimum, maybe more frequently in the summer. Time for just the two of us to wander.

Posted by Maiga Milbourne at 4:50 PM No comments: