Fear of death or social media

My right shoulder has ropes running through to my neck. My right wrist at times gets painful and creaky. I feel tension in the muscle under my right thumb. It's not exclusively, but I think largely, due to my evil iPhone.

Evil and yet I love it. I love finding a coffee shop with an outdoor patio during a break between teaching. I love finding weird, quirky places when I pull up into town. I love that I can keep my inbox neat and manageable by frequently deleting the junk messages or sending a quick reply to something important.

I frequently check my email and Facebook. I get work-related messages on Facebook with some frequency and that's where I do most work promotions. Honestly, I don't mind it all but I do feel it in my body.

I'd been feeling like I wanted an internet cleanse really just to watch what happened. I wanted to see if my body did unwind a bit and what my mind felt like without the frequent connection and stimulus.

My work is pretty email reliant and I have certain obligations so it took a little coordinating but I did it-- cleared two full and surrounding partial days where I had fully communicated that I would be unavailable. Last Monday I taught three classes, squared away the last of my communications, made sure everyone had what they needed from me, jumped in the car, and headed north.

I printed out directions, which I hadn't done in awhile. I wanted my phone OFF. I also printed out swimming holes that might be fun to visit or other weird things I'd heard about.

I thought there would be a lot on my mind that I would want to remember-- tasks to attend to-- but nope. There really wasn't any resistance in falling into this parallel track.

Kevin and I returned to our favorite little cottage on a sweet creek in the Catskills. We walked into town and ate food at cafes. We walked back and kept the door open to the creek to feel the air and hear the rushing water. Incense stayed lit to keep bugs from our door. I opened up The Signature of all Things and didn't close it until I read the last word a day later. Kevin went through a few of his favorite works as well. 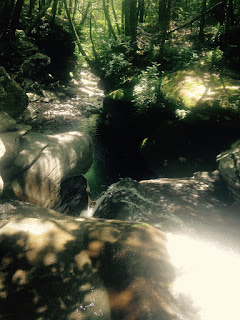 We swam in the creek. We laid on boulders and sun bathed.

We also did a halfday meditation retreat with Amma Sri Karunamayi but that's a separate subject for another day!

As I waded through the water I tried to feel what was different. The main thing I felt was that I had more of myself. My energy was all going into me, my relationship, the moment. None of my energy was siphoned away into another town, a different task, or a different moment. I felt more cohesive, coordinated, and potent. That felt really good, unexpected, and worthwhile.

I wasn't sure what I'd find-- that I was hopelessly addicted to social media and needed a constant hit? Nope. I like it. I like being connected but I was fine without it too. I wasn't sure if I'd feel isolated. No. I just felt like my energy got to be concentrated and directed more mindfully.

I waded through the creek and laughed as I thought, "if a tree falls in the forest and no one hears it..." If I'm in the forest and no one hears me, did I happen? I think that's often the underlying motivation for constant updates and contacts. "I am here, existing, living, and trying to leave a record." Why? So maybe we can defeat the one undefeatable, seemingly chaotic, utterly consistent experience of our existence?

So, if no one knows what I'm experiencing, if no one knows me, other than me, is that enough? Is the present moment, this experience enough? Because ultimately, whether it's broadcasted or utterly private, this experience is all there is. This present moment, this feeling and engagement with it, this is it. As far as I can tell. No big meaning. No big culmination. No big quest. Just this. So if I'm the only one in my present, as all of us are both the only one and with everyone in this big is-ness, is it enough? Can it be enough? If it's fleeting? Ultimately unshareable? Ultimately unbearably private and completely universal?

Is that all there is?

I had Leonard Cohen wafting out of the open french doors of my cottage. I had an open book on a sun drenched boulder. Moss climbed on the boulder reminding us both that all is built and all breaks down.

It's all completely enough.
Posted by Maiga Milbourne at 7:22 PM 1 comment:

A process, not an instant

Last weekend I met my friend Julie for lunch. I became one of those vegetarians rolling my eyes at delicious bites of kale and sweet potato while Julie recounted her recent visit to Michigan. She'd read an article on the process of death-- that our thoughts of death being sudden and finite don't bear out.

And I got really excited.

Bear with me, but I love talking and thinking about old age and death. I don't mean to be morbid and in fact I don't think that I am. I love being intentional, aware, and finding light in areas of our life that are charged.

We're all thinking about death, or no-more-ness, all the time. Sometimes it drives us and scares us. I want to think about it to be more comfortable with it. I do it every time I practice yoga and lay down in savasana.

Another friend of mine had recently witnessed the death of someone dear to her. She recounted something similar-- that the body went through a process of shutting down but consciousness flickered forward and backward. The linear notion that we sometimes have of born, alive, dead, as being fixed firm places didn't bear out in what she saw.

Years ago I knew a pregnant woman who reached her due date and panicked that she hadn't automatically gone into labor. Other women who had delivered kids said, "don't worry, due dates are more suggestive than firm" but this first-time mother was scared and her stress was having an impact on her health and the health of her child. She went to the hospital, was induced and had a c-section to bear her child.

I remembered that and remembered how it shed light on this growing notion that our bodies aren't robotic, they don't function one way. In yoga I study anatomy and find that it's a beautiful map but the mechanics of two bodies rarely match. What is often more effective is understanding anatomy and biomechanics and then observing the intricacies of those systems in motion as they interact with environment and shifting circumstances.

According to my due date, I was two weeks late. My Mom was 39, unexpectedly pregnant with her fourth child, and I was breach. On my due date I turned. She said that it felt like an earthquake. When I was born I was 8 lbs 10 oz so I must have been nearing that size two weeks earlier. Two weeks late, a mother of "advanced maternal age" delivered me naturally. My progress into this world and pace didn't fit neatly into prescriptions around gestation and birth. I'm grateful that my Mom had already born three children so she wasn't so scared. She had a bigger faith in letting the process unfold and letting me emerge as I was ready to.

When a person is born is hotly debated in conversations around abortion. I heard a similar conversation come up recently in the yoga community about when the atman, or soul, enters the vehicle of the body. I heard one yoga teacher say it enters through the sperm in the moment of insemination. Ram Dass gave a lecture in the 70s saying that the soul might enter the body at any time-- at conception, during gestation, or after the baby has been alive for some time.

The cycles of birth, life, and death are more enmeshed than distinct.

There are parts of me that are dead. Some of my skin is dead and it sloughs off. I've been burned and watched new skin be created and form a shield across my body.

The me that was a baby is no more. It died. A child was born. That child died. A teenager was born. That teenager died. An adult was born. As an adult I've been a myriad of people living a myriad of lives. I grieved when some of those lives ended. Others I left gratefully.

And yet, all of those incarnations is still present in who I am in this moment.

I've known a multitude of lives and deaths. Their boundaries were not always so finite.

The other night I gathered with some friends to discuss chapters of Ram Dass' Paths to God.  The book is filled with beautiful suggestions, ruminations, and lectures on the Bhagavad Gita. He spends a good deal of time selling the reader on reincarnation because if you don't believe in reincarnation then some of the related concepts of karma and dharma simply won't make sense.

While we discussed evolving souls and the teachings of the Gita, I thought back to Helen Nearings' book Loving and Leaving the Good Life. She recounted watching her lifelong partner, Scott, near 100 years old. He started to find that he could no longer tote fire wood. That was an indicator to him that the usefulness of this body, this sheath, had run its course. He put his affairs in order. He made sure Helen was OK. They had a birthday dinner for Scott on his 100th birthday. He celebrated with his friends. Afterwards, he stopped eating. It took three weeks for the vitality to run out of his body. He left intentionally. Helen watched a man who entered the world with purpose, lived with vigor, release this life consciously.

Isn't that what we all strive for? Consciousness where previously there was not. A witnessing of the rising and shedding of lives, moments, and identities. A full investment in the moment and a willingness to release willingly when the moment has passed. Letting the transition not fill us with fear, but with awe.
Posted by Maiga Milbourne at 11:15 AM No comments: