This Wholeness: a recap of the Jivamukti Yogawood Retreat to Vietnam

This past January, Julie Kirkpatrick and I took 20 students on a yoga retreat to Hoi An, Vietnam. It was a big endeavour to coordinate travel for all these Holy Beings across the world, but completely worth it. I've only begun to download all the photos. I'm seeing so many more incredible images from the various participants-- but I'll only share those with their permission! I'll do my best to recap this experience from my own records.

From various parts of the US and Switzerland, we all flew into Ho Chi Minh City. This is about 20 hours of travel, minimum, so there were some bedraggled and brave souls touching down in Vietnam's capital. Most of us arrived late Saturday evening, stayed the night, and then flew out to Da Nang the following morning. This was a quick commuter flight up the coast. From Da Nang, Hoi An is about 20 minutes away. On our ride from the airport we stopped at China Beach, made infamous for it's RnR during the US-Vietnam war. 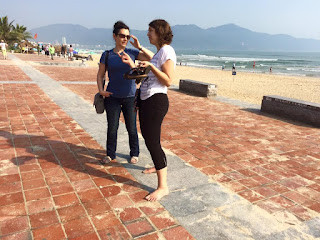 The group stayed in three boutique hotels in a small radius in Old Town Hoi An. Breakfasts were at each individual hotel, everyone was on their own for lunch, and we had dinners together in various top notch Hoi An restaurants. Each morning, we walked along the river and through the bustling market place to a patio we had rented for our yoga space. 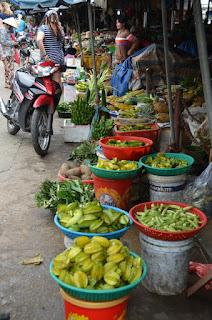 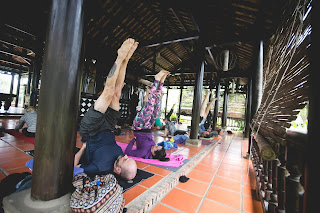 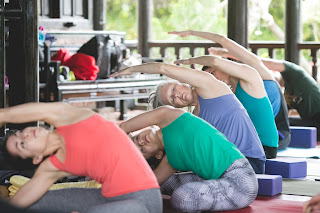 After practice, participants spent their days taking in the bustle of Hoi An, visiting temples and pagodas, taking boat rides on the river, cycling through the surrounding rice paddies, commissioning tailor-made clothes, shopping, learning to make lanterns, taking cooking lessons, and much more. The more ambitious amongst us went further afield to neighboring towns like Hue while others (like me) went hard on the inexpensive massages. A 60 min massage ranged from $12-18. At a certain point I was averaging about one a day! 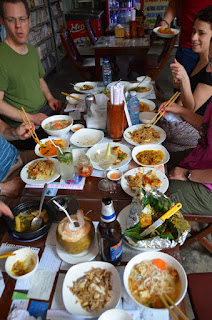 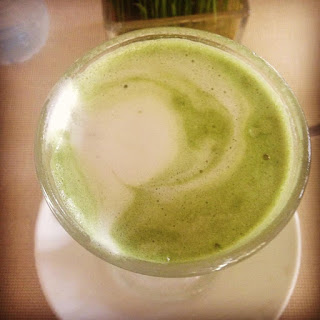 Hoi An is known for its food so there was a lot of sampling. In between massages I was a fan of matcha tea lattes. Not only is the food delicious and locally grown, but it's really beautiful. That strikes me every time I'm in Vietnam-- there's this rare ability to make everything beautiful: your meal, the moment, the land. There's an intricacy and attention that moves me. 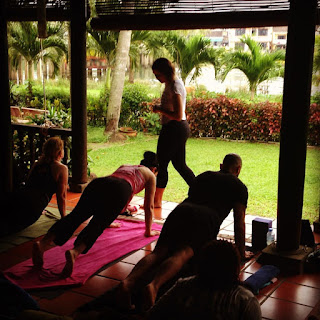 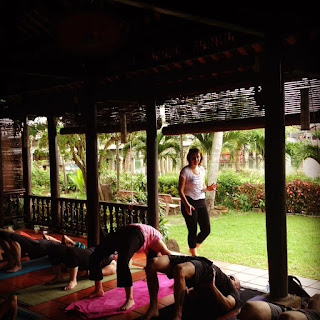 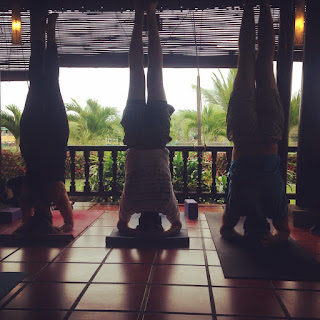 Evening practices were more gentle or restorative. We incorporated meditation, chanting, and sometimes philosophy discussions. Unfortunately, Vietnam is not the quietest place in general! There are constant motorbikes going by, music, and the general hub bub of life. Julie taught us amazing meditation techniques to let the noise bring us to a centered space, so that we learn how to let our circumstances facilitate peace and not feel at odd with our circumstances. A good lesson in general and a great lesson when you're traveling.

The nearest city to Hoi An is Da Nang. The Solar Wheel, the big ferris wheel shown below, is said to be one of 10 biggest in the world! We visited Da Nang one day on the hunt to visit a local fortune teller (that story to come). While waiting for the fortune teller we wandered through some local farm plots. They were so beautifully tended. They showed the same sweet attention I find again and again when in Vietnam. This was among the many reasons I was so glad to go back and visit this place again with all these dear yoga retreat participants. We got to take in the beauty and the cacophany with equanimity and bring these lessons back home. 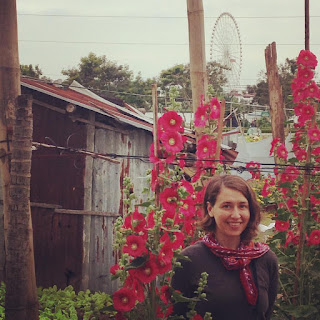 As this retreat was so far away, and in a time zone 12 hours off from most of the group's usual EST, we spent 12 days. This requires more than one post! Stay tuned for recaps from Marble Mountain, My Son, and An Bang beach village.

Posted by Maiga Milbourne at 6:00 AM 2 comments:

Into the Great Wide Open: A Yogawood Jivamukti Retreat to Colorado

Into the Great Wide Open: A Yogawood Jivamukti Retreat to Colorado

Oct 6-10, 2016 (Columbus Day Weekend)
Chautauqua, Boulder, CO at the trailheads to the Flatirons

Enroll at www.yogawood.com under "Retreats"

Accommodations: All lodging is in Chautauqua's historic Mission House (unless we fill, in which case we have the option to open up additional cottages).

There is one room with twin beds. This room will go to the first interested enrolled participants! All other rooms have one queen sized bed. Each room has its own attached bathroom. If you’d like to share a room but do not have a roommate, let us know! We’re happy to make a match.

Included: Daily breakfast and dinner service, two yoga practices, and accommodations are included, but your time will be your own. Join us for as much or as little as you choose!

Not included: Lunches. Travel to and from the retreat (which, for many of you, includes flying to Colorado). Transport to Chautauqua (see below-- we have discounted shuttle lined up for you if you fly to Denver!). 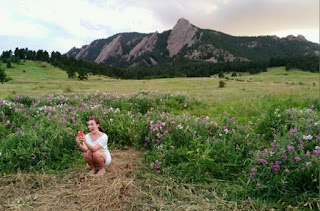 We *cannot* hold space without your tuition payment. The listed rates are based upon full payment by May 1, 2016. If you pay any portion of your tuition and room rate *after* May 1, 2016, the price increases by $150. We are able to offer discounted tuition only with early payment.

Cancellations: We understand that things happen. We will refund all payment but a $100 administrative fee before May 1, 2016. There are no refunds after May 1, 2016.

Transport: For those flying into Denver, we’ve arranged discounted shuttle service. Check into your own private portal to reserve your ride! http://greenrideco3.hudsonltd.net/res?USERIDENTRY=YOGAWOOD&LOGON=GO 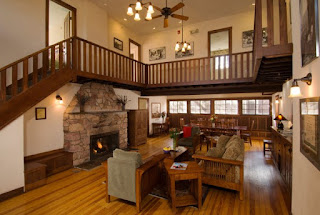 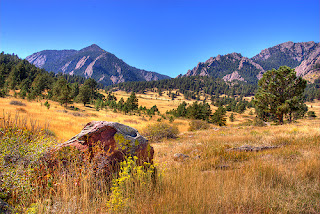 Posted by Maiga Milbourne at 9:58 AM No comments:

My friend just wrote on Facebook, "The most important thing you can do for a victim is believe them."

And I exhaled and thought, "Thank you."

So much of my own healing process from trauma has been trying to get the people closest to me and most important to me to believe me. I'm pretty sure that they can't, because believing me would cause some irreperable harm to the way they view the world. That's too much for some. I'm starting to understand that.

So I'm left with either feeling crazy, like my version of reality is suspect, or working to believe myself.

It made me think about a process I've seen with several yoga students and a process my teachers have likely seen with me. More than one time, a new yoga student arrives either a minute before class starts or late. They are carrying so many items: bags, jackets, change of clothes, a ton of stuff. Their stuff is messy and they noisily struggle with it. They walk across the studio with their shoes on, which tracks dirt and dust on a surface close to students' faces while they practice. The noisy, late, disruptive new student huffs and breathes loudly. I instruct to let the breath be soft but the cue doesn't land. The new student's body requires extra attention so they don't hurt themselves.

I have totally been this student.

And I've witnessed the following: the teacher works with the noisy, messy, late, tense, loud, uncoordinated student. Over time, the student takes up less space in the room. They arrive a few minutes early and bearing fewer belongings. They put their shoes away neatly. Their breath is calmer and steadier. Their body is benefitting from the movement and winding more safely through the poses. Their presence is a joy.

And I wonder if that intial encounter is because this new student is not often seen. Not often believed to be who they are.

I took up so much space at so many moments in my life. "Believe me! See me! Please!" And as I was seen, I felt calmer. I was, and now am, OK.

In yoga, there is a teaching to put forth what you hope to receive, but of course, relinquish expectation of receiving it. I've found this to be unbelievably effective. Recently, I've felt like I can't get my professional life together, I run around too much for too little money, I feel burnt and ineffectual. I started saying to others, "I think you're good at what you do. I think you deserve success," and they brightened in front of my eyes. And they reflected the same sentiment back to me. We saw one another and both calmed.

The word "victim" is laden and fraught. Some feel like it's simply effective language to identity the person harmed in an exchange. Some feel like it becomes a dimishing identity. Both are largely true. Now, when I see someone who feels victimized and asks to be believed, within reason, I try to do that. I try to honor their experience and say, "I see you." When I do that, they tend to feel less bound by the story of their victimization and themselves as a victim.

Being a yoga teacher you get to give to others the thing you yourself need. And you start to figure out how to be there for yourself and feel less trapped by others. I believe myself. And that means I don't have to be stuck.
Posted by Maiga Milbourne at 8:58 AM 2 comments: