I go to so many new Mom circles and I sink gratefully into the commiseration and I also resent it.

Because I think the idea of "motherhood" in the US is absolute BS.

I wanted no part in it. It was maybe the primary reason I was ambivalent around having children for so long.

I need the commiseration and the venting because the problems are real. It's insane to have no national paid parental leave. Breastfeeding is fucking hard. Other people's unresolved pasts and their need to shove them down your throat in the form of constant unsolicited advice is toxic. The fact that culturally we don't know how to relate to one another and support one another means we all struggle with community, relationships, and support.

That shit is hard.

Motherhood shouldn't be that.

I look around the room at a diverse group of women. Always. Always shifting. They're all different. It's why some suck their teeth and want the others to suck it up. And others are sniffling. And some want to start a revolution. (And I may be any one of them given the day.)

And the babies in their arms are just as diverse. This one is long and skinny like his Dad. And fuckers still constantly pester his Mom wondering about his health. This one has this circadian rhythm. This one has these allergies.

They're humans. Little tiny humans. And all diverse.

And the orchestration between the adult, diverse Mom humans and the tiny, struggling-to-effectively communicate baby humans is beautiful. There's attunement and false steps. There is utter love and mutual devotion and exhaustion and terror.

There is the fullness of human experience swelling in the intensity between each mother and baby.

And some of the mothers throw themselves fully and endlessly into the role.

Some rebel and really want hot dates or good sex.

Some forget who and how they ever were.

Some do it so majestically. They grow with their baby and grow as themselves. Their own art is breathed into the world as they write early in the morning or choreograph a dance piece during a nap.

Motherhood is so much bigger than we allow it to be.

I recently read an article that was so beautiful. It also called BS on the density of expectations on mothers (and it is mothers. I know fathers have their own experience. I can speak to this one and it's specific!) alongside the radically dwindling support. Women are continuously told that when anything goes awry: the kid has an issue, sleep is a struggle, the marriage doesn't include as much sex, the house is messy, whatever! It's the mother's fault.

And women have honestly been complicit. We're culturally taught to people please and acquiesce. We really haven't had a lot of energy to fight back against this trope while we're breastfeeding around the clock.

And then, some of us resent the burden and feel others should have it too. Only fair.

I've loved traveling my whole life because it always reminds me of the diverse ways to live my life. If something isn't right for me (like in my case, college :) ) there are other paths.

Women mother differently in other parts of the world.

And when they have more community support and aren't so sleep-deprived, they're less likely to swallow this load or horse shit.

And when babies growing up knowing that the person in the center of their orbit also centers themselves, that message is transmitted. Center yourself in your own life. Matter the most to yourself. Let your life be your project. Let your health be your responsibility and your power. Live in your life. Live in it fully.

Trying to talk about this topic feels like tiptoeing through landmines. There's unprocessed shame and resentment. There's defiance. There are a diversity of feelings and experiences.

And that's what I crave. That diversity. That chorus of voices puncturing through the veneer of the martyred mother; tired, unsupported, dry, not sexual, not creative, a drained vessel for her family.

Her counterpart: the neglectful, selfish mother or the one who leaves. Either one who prioritizes themselves.

There isn't as common a narrative of a woman who values herself and does that within the nexus of her family.

I want that story told. In all its diversity. The chorus of voices of how they configure themselves in the real context of others who need them.

I know that this is not the time in my life when I can endlessly indulge my own wellbeing. I care for myself in tiny pockets of time. But I do care for myself. And I do it in part to model for my daughter but beyond that, I do it for myself. Because I am at the center of my own life.

I relate to her when I am. She can be herself when she does not have the burden of defining me.

Casually and frequently, I'm asked for my elevator pitch explanation of her. It usually amounts to my baby is "good" or "bad," i.e. she's a "good" sleeper and an utter angel or she's a "bad" kid with colic and clings to me. And the truth is, she is honestly all of that. She's so so unbearably good and also awful. And I find myself protective of how I respond. I don't want to diminish her.

I'm not asked by acquaintances to characterize my marriage in the same way. Kevin and I fought so hard to not have a marriage that was cliche-- I nag and he resents. We've worked to be humans to one another, to see one another continuously, and to let our relating live outside the bounds of flawed, limited definitions of marriage.

I want that for my mother-daughter relationship too. I don't want to fall into the prewritten script of battle and struggle. Seems like the options are: 1. she's an angel living out the life I couldn't live myself or 2. she hates me. What if we live in witness to one another, both being who we are? What if we had a relationship that wasn't written for us, but rather one that we live out minute-to-minute? What if instead of being asked if she was "good" or "bad" or a "good sleeper" or whatever, I was asked, "What is it like? What is your experience?"

There's so much more space. 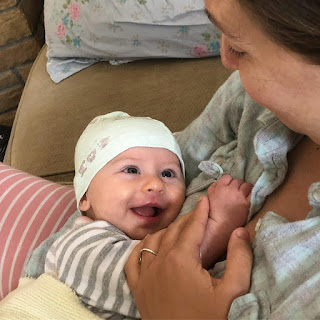 Posted by Maiga Milbourne at 8:59 AM No comments:

What I currently know about birth

Birth is a force, an energy, like standing in the ocean and feeling a tidal pull or standing on a mountain and feeling the rush of wind. Birth has it's own identity and agenda. It's moving spirit to earth and that process isn't simply physical. I believe, for a woman to birth, she works with herself, the baby, and the birth force. It's optimal for each woman to know herself well enough to understand her own fears, what makes her feel safe, her ancestry, her intentions, and what she's willing to relinquish. Ideally, she also feels the baby's energy-- how the baby wants to move, the information the baby is providing about itself during the pregnancy.

The space that forms around birth is timeless-- time stretches and contracts beyond everyday rhyme and reason. It's necessarily messy and broken because it's an uncontrollable, feral force.
Posted by Maiga Milbourne at 9:07 AM No comments: