One night in Panama

A few years ago, we set out on an adventure.

Kevin and I were weaving through Panama. We had no firm plans, just many ideas. We'd planted ourselves in the San Blas islands for a few sun-kissed days. In my opinion, the most worthwhile destinations take some doing to get there, so we were boats and shuttles away from internet and phones and infrastructure. We were lounging in hammocks and eating fresh coconut. But it was time to go. 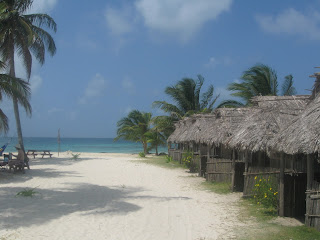 Early in the morning we boarded a small speed boat to cut through the steel waters and low clouds. We passed the Kuna villages hanging off the edges of the islands. We wove through mangroves and canal channels to get back to the beach of mainland Panama. A jeep met us. Sleepy, groggy, loaded in for hours of weaving through mountain switchbacks. Five swerving hours later we were deposited back in Panama City. Mission in mind, we hailed a taxi to the bus depot.

With tickets purchased we boarded an eight hour bus to David. We squeezed ourselves into the back of the bus, where a teenage boy eagerly boarded next to us. I wedged my head against the window to rest while Kevin learned about this boy's apprenticeship at the bus mechanic and his appreciation for graffitti art. 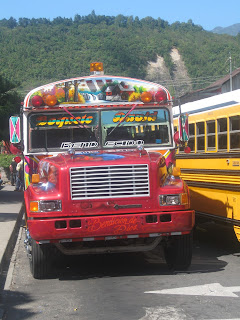 It was dark when we arrived in the northwestern city of David. We had one leg left, a one hour bus ride into the mountains to Boquete. Wearily, we were directed towards a diablo rojo, a refurbished school bus with a big "Boquete" emblazoned over the front windows. Friday night in David meant that teenage couples were on the prowl for parties and secluded spots. The bus filled up with teenagers, arms wrapped around each other. The Phillies paraphernalia by the driver swayed as the bus lurched up the mountain. We were in Chooch territory.

Little by little the bus let out couples as they wandered down dimly lit roads to parties and friends houses. We were left with a leering drunk who stumbled towards us, past us, and then away again. The windows were open and the air soft on this tropical night moving up the Panamanian mountains. We were heavy and cumbersome-- all our luggage was buried between our knees, under the seat, and on our laps. Exhaustion started to weigh on me. We had started our day early, on remote island shores. We had only eaten a bit at various rest stops.

One of those travel moments set in: why am I doing this? Why am I here? I'm tired. I don't know what's going on. This was a mistake. A headache started pulling grey through my forehead. I leaned back and listened to the music the driver had playing. It was tropical and swaying. It lilted with the breeze. Just as suddenly as the weight of my weariness landed, it lifted. It was one of those travel moments: elation that I was here. I get to experience this. The music felt lighter and full of hope. The music held that moment: my exhaustion, Kevin's arm protectively on my shoulder, a wandering drunk, young kids in love, and soft, soft breeze. Of being somewhere unbelievable and going somewhere unknown.

We asked the driver the name of the artist as we disembarked. He growled, "bachata!" We made a note of this magical Panamanian music.

Throughout our trip we would occasionally ask about purchasing Bachata music. It wasn't until a few weeks later that we were back in Panama City and found bootleg CDs being sold. A young sales rep took us through the stacks to the Bachata section. We were sure we'd struck some type of rare gold! We picked up the artist we had heard that night: Aventura. We read the liner notes. Bachata is a type of music originating in the Dominican Republic. OK, we nodded, makes sense. The band Aventura lives in the Bronx.

A week later I was back in the US waiting tables at a diner. I waited for my food to come up and heard the music the Mexican chefs were playing in the kitchen. It was Aventura. It was Bachata.

I had heard the song a thousand times before that night in Panama.

But now Bachata is always that night in Panama. And a reminder to hear it all.
Posted by Maiga Milbourne at 9:24 AM No comments:

Working to enjoy
not maintain, cajole, manipulate, change
my body

Working to find sanctuary in
not stress, maintenance, chore
my home

Working to revel in
not weed, mow, neaten, tame, stomp on
the land
Posted by Maiga Milbourne at 9:58 AM No comments:

I have been very quiet on here for awhile. I've felt a strong urge to be more still and more internal. For once, I'm listening.

I'm feeling more in touch with who I am outside of the stories of "what happened to me." (What I remember: unapologetic happiness, sun-kissed cockiness.)

I've been dreaming of whales and zebras and walk-a-bouts in Europe. (And realizing that feels connected to knowing a me before/behind a me.)

I've been thinking about this adage that gets tossed around in yoga: "If you're physically healthy, practice Ashtanga. If you're injured or ill, practice Iyengar." And I've been thinking that if that's true (and I think it's true) that the same applies to yogic spiritual and philosophical studies. "If you've taken time to work on emotional self-awareness, emotional literacy, and healing, then these studies might be appropriate. If you haven't, if there are unnamed fears driving many of your actions, or a cloudy lack of awareness, spend time understanding your own emotional make-up before delving into spirit." I'm starting to think that we need to teach each other emotional health as much as we teach physical health. In Master Patanjali's 8 limbed path to the state of yoga, clarifying the yamas, or relationships to those we perceive of as other to us, is the first course of action.

I've been thinking a lot about stars and retrogrades. I don't understand astrology. I've started hearing certain things-- Vedic astrology, herbalism-- that perk up my ears. Not that I'm a straight up believer that star alignment is predictive nor on the nose advice. More so the Jungian notion of reaching into our subconscious through symbols. Stars and archetypes are powerful symbols. Symbols are powerful placeholders for beliefs and feelings. Spending time with these symbols and ideas feels good to me. There are also some amazing writers working in astrology (check out chani nicholas) and their words have heft.

I'm leaving space for both and. People are both awful and. Astral. Stars are both stars and. Reminders. Of the bigger picture.

I've been working a lot and working on new, bigger projects. I'm simultaneously stimulated and scared. So I stay the course and let the energy work through. There's no need for the fear to define my efforts.

I've been thinking about hauntings as genetic trauma. I've been reading researchers looking into how trauma passes through generations like a funny shaped nose or hair color. I read case studies on insomniacs remembering the death-by-freezing of an unknown uncle. Healing the insomnia offered a healing for the larger family.

Without the scientific studies, these instances would be characterized as hauntings. I've heard that by honoring ancestors and healing ancestral wounds, we free ancestors. And it helps me understand ghosts. And makes me believe in both. And.

That I'm not meant to be afraid. I am meant to pay attention. I am meant to feel power as energy. To listen.
Posted by Maiga Milbourne at 10:01 AM No comments: