Feminism, Relationships, Individual worth, & money. Ayn Rand is in my head!

About two years ago, Kevin asked me to quit one of my jobs, waiting tables, so that I could partner with him on Rooted Landscaping. We've been together well over 10 years and have joint bank accounts. Until we got Rooted more organized (part of the impetus for me to come on board) I wouldn't have a salary per se. On paper at least, I wouldn't earn much of anything.

Even though I was working for Rooted, because our income wasn't separated, I felt like a kept woman. If Kevin and I weren't a couple, I wouldn't be able to support myself.

I was freaking out.

Around the same time, a friend of mine moved into the area. Given the economy and the fact that she was a fresh transplant, it took her months to find work. Thankfully, she was also in a relationship where her partner could support the two of them. She didn't lay around and eat bon bons. She finished a book she'd been working on for years, volunteered in a field where she'd created international non-profits, and kept their house spotlessly clean.

She was freaking out.

Recently, another friend described her transition from a good job, but not the right one for her, into a graduate program that would allow her to work in a new field. Her job is driving her nuts, which means she's driving her husband nuts. He's urging her to quit and take a break before beginning grad school. Leaving her job is inevitable, the question is when. She's waiting to leave a job that she's not fond of because if she went now, she'd be completely reliant on her husband's income (for only a few months!). Which they could handle.

But the thought is freaking her out.

In each conversation with these women, our eyebrows raised, our hands gesticulating wildly, we exclaimed, "He'll resent me! I can't take care of myself! I'm a bad feminist!"

I'm sure all of our individual politics and beliefs vary, but none of us are too keen in total capitalism and we're not racing to be rich. For me, personally, I believe whole-heartedly in interdependence and less reliance on money. I'm not impressed by wealth accumulation nor fancy careers. I believe we should all focus on health for ourselves, our communities, and our environment.

Yet, in a total about face, I feel like I have to have enough income at any given moment to support myself in the lifestyle to which I've become accustomed. Which is (by global standards) extravagant and unnecessary.

I absolutely believe that communities should support one another. Children and elders should be supported by those who can generate resources. Their value is outside of economic scale. Similarly, when people are ill or parents are on maternity or paternity leave, they shouldn't worry about income. There are reasonable times when any of our work will not be remunerated.

In the layers below my intellect, there's something residual, a lingering belief that causes my emotional strings to spasm when triggered-- I still equate independence and responsibility with money.

In each of the instances outlined in the introduction, the partners in the equation were TOTALLY OK with providing for their partner. In each instance, both parties were contributing to the welfare of the whole, but not all work was financially compensated. Thankfully, these were situations where at least one party had sufficient gainful employment to support their beloved.

That spasm-y emote-string reverberates with, "I'll be a mooch. He'll resent me." All the nonsense rhetoric unfairly applied to those who receive welfare (and not justly applied to the corporations truly bleeding the public coffers). These aren't even my politics?! Why are they in my head?!

I PURPOSEFULLY built a life that is based on stability but not accumulation. I intentionally have invested in community and purposeful work at the expense of excess things/stuff/money. I committed to someone with shared goals and beliefs. And yet. Lurking. Just below.

So what's up with this? I can speculate a bit. I'm 33. The friends I profiled range from 30-45. We were all pretty conscious in the 80s and 90s when a lot of lip service was given to women having careers outside the home, "having it all," being independent. My older sister was always my hero. I always knew she was and would be self-sufficient. I knew that I would be too.

I didn't anticipate the varied compromises and unexpected scenarios of adult life, specifically in partnership. I didn't realize the array of decisions on any given day. I didn't realize that all my unexamined beliefs would surface so that I could blessedly know myself, even when the process feels freaky and foreign.

It took me a solid year of freaking out before I acknowledged that I work, I contribute, my worth is not a paycheck. I still think about this stuff. Rooted is also getting to the point where I could track my own salary, though I haven't yet.

We're the generation born to feminists, me thinks. I'm grateful for the women who preceed and mentor me. I wonder what I have to pass down to the next? That the models of independence we're erecting can be nuanced? That we can disentangle independence and respect from earnings? That we can create our own economies of barter and trade, and offer energy?

Early in our relationship, Kevin said something really insightful to me. "Politically, you believe in interdependence, but emotionally, you're on board with Ayn Rand. What's up with that?"

Truly.
Posted by Maiga Milbourne at 10:00 AM No comments:

When I remember Cuba, I think of escape.

This morning I read a poetry prompt about place. The reader is invited to think of a place where something happened.

I thought of listening to Wyclef Jean on the roof of my semester-long home in Havana.

During that semester, the students in my study abroad program and I converted a University Hotel in the Vedado section of La Habana to a dorm. The second story was our haven from the incessant hisses and invitations endemic to walking the streets of La Habana. Though I think many of my classmates were less troubled by the quick intimacy of Cuban relationships than myself.

I spent hours in my room watching CNN. The first month of our semester abroad the World Trade Centers dropped after the plane crashes. I saw the footage looped from my urban tropical dorm room. When I truly drove my roommate nuts, I went up to the roof. Three stories above our neighbors playing dominoes on over-turned milk crates. Three blocks uphill from El Malecon, the crumbling wall holding the Caribbean Sea at bay.

One night, my roommate and I wandered down to the always populated Malecon. We stood on the lip of the wall. It was one am, which I guess must have been high tide. The waves crashed against the wall and steamed the tops of our heads. My roommate, Kieu, was from LA. She was used to late night visits with big water.

During the day I sometimes took runs along El Malecon. I put headphones on to try to deter the inevitable friendships of walking the streets of La Habana. It rarely worked. I would try to out-run those who wanted to talk to me.

Back home, a family I didn't know how to be a part of, a relationship that had been long-dead. The embargo kept so much at bay.

I walked up to the roof at night, felt balmy sea breezes, watched life lived stories below, and listened to my walkman.

I guess the thing that happened was I became accustomed to life without them. The whole world changed that semester. When I landed in Newark that winter, American flags dangled from every conceivable surface. Patriotism hung in the air in equal parts fearful and aggressive.

Soon after my arrival, we both conceded the relationship was long gone. We made our peace while I was out of range for phone calls and emails. When I got back to the States I moved out, left college, and cut ties.

On the rooftop in Havana, I made peace with life on my own terms.
Posted by Maiga Milbourne at 9:51 AM No comments:

It's National Poetry Month! I've been writing a poem a day, but privately. I have some raw material today that I thought I'd splash into the world. I always welcome feedback. 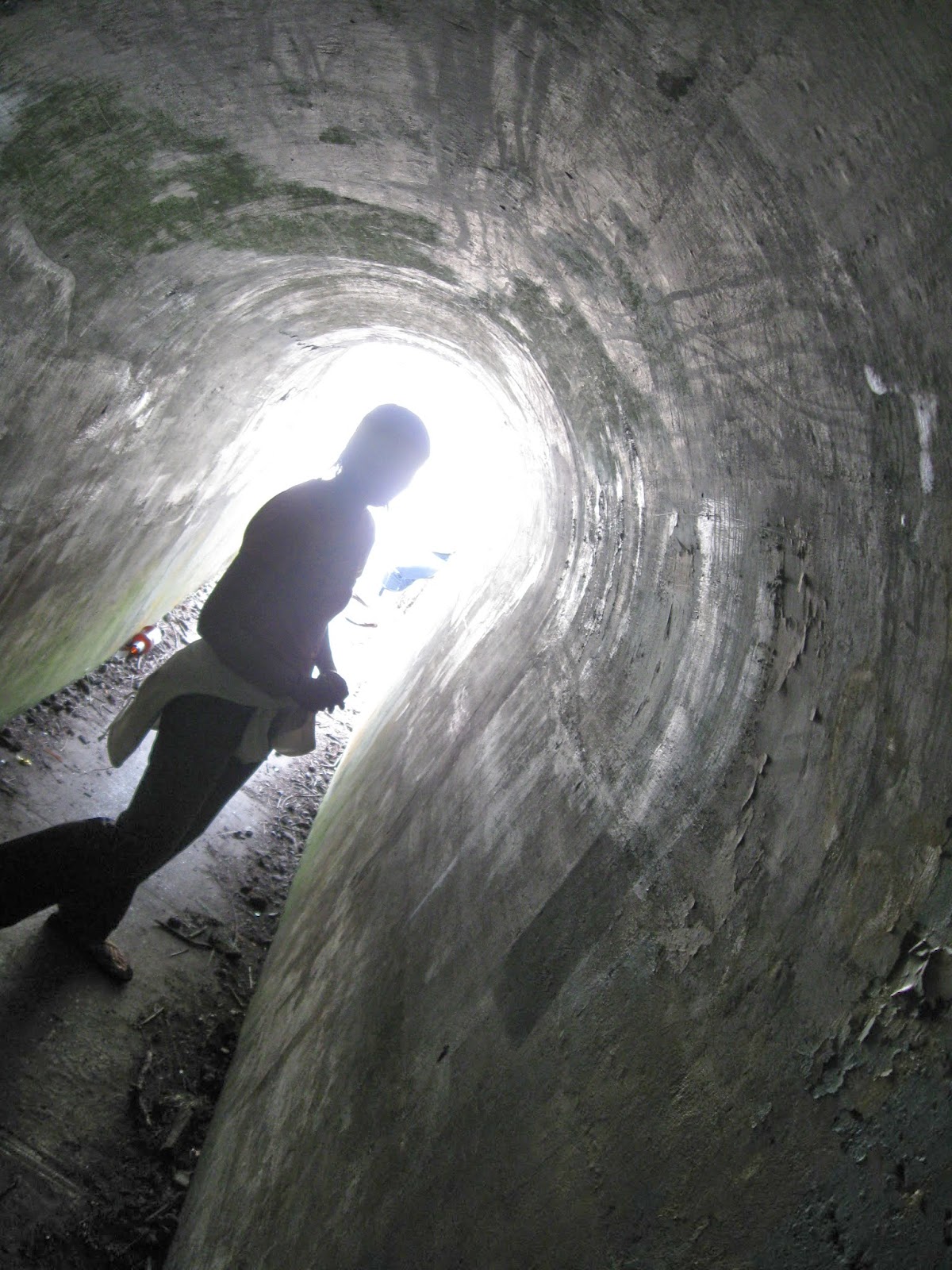 And a backbone.
Stop apologizing for
every inhale.
Stop swallowing your
words.

You're happiest tied
to railroad tracks;
unleashing your hair
from the castle tower;
sleeping for decades
under glass.

Get up and make a
trail of muddy boot
prints.
Publish every one of
their whispers.
Steal their leverage.

I dream of islands because
they are calloused scar
tissue rising from
the sea.
Posted by Maiga Milbourne at 9:44 AM No comments:

Email ThisBlogThis!Share to TwitterShare to FacebookShare to Pinterest
Labels: poetry 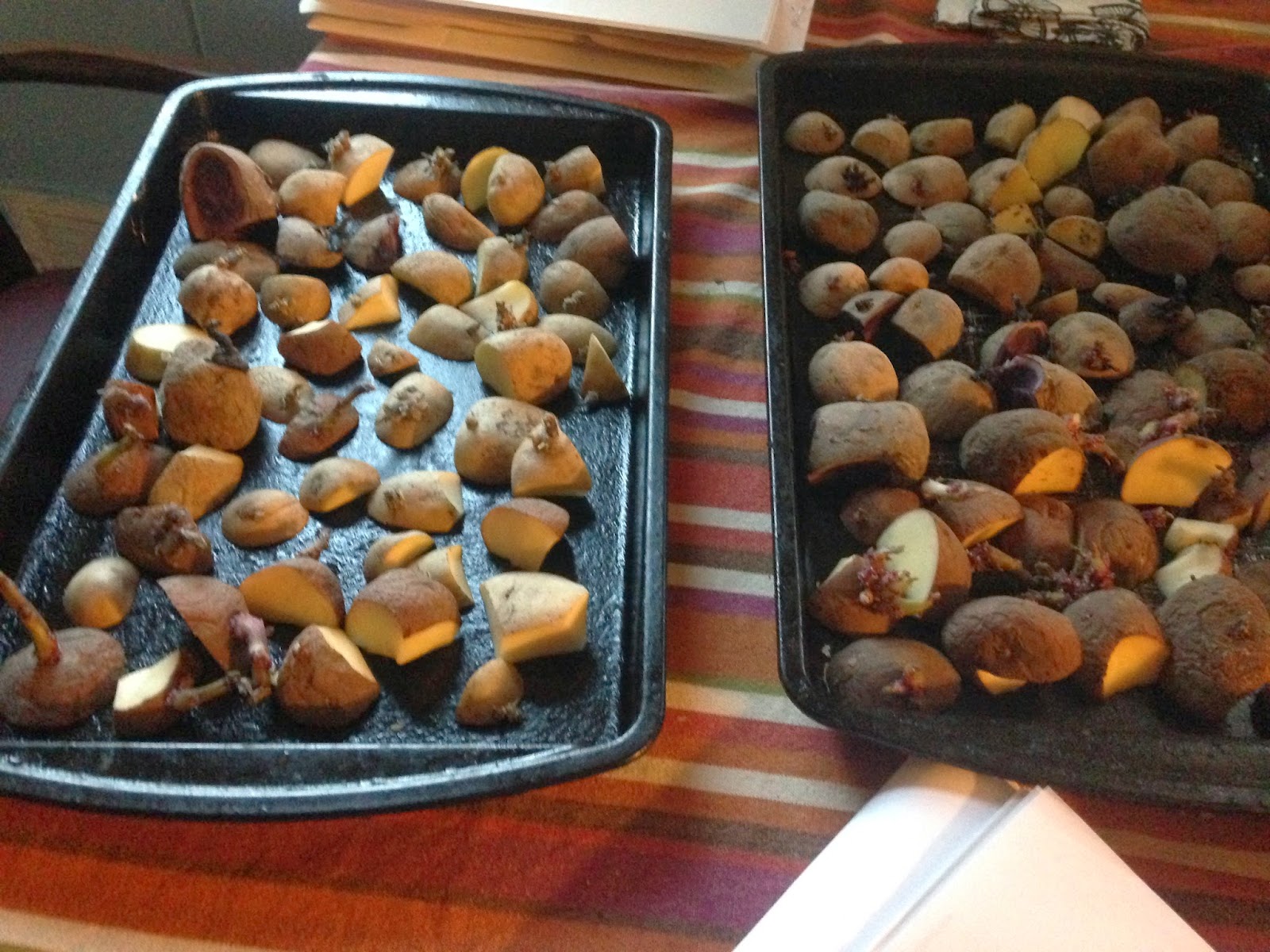 Cutting potatoes to dry and then plant. Always makes me think of my maternal grandmother. Towards the end, I was quick with questions, "What was your mother like? What games did you play?" She was playfully evasive.

I gathered one story.

Her father was on the board of the bank. Their farm was worked by white share-croppers. They did plant some themselves. Her father was busy, arriving home late. My grandmother wanted to help him, so she began prepping the potatoes for planting. She cut through the eye of every potato, thereby ruining the seed stock. When he returned to her eager helpfulness, a flash across his face informed her of her mistake. But he thanked her, graciously accepted the seed potatoes, and moved towards the fields as though he would plant them.

Every time I plant potatoes, I think of graciousness.
Posted by Maiga Milbourne at 7:42 PM No comments: