Community is needing each other

Last week Kevin & I sat around our friend's South Philly living room, balancing plates of home-made spaghetti on our laps, reflecting on a talk from Michelle Alexander heard earlier that night at Penn.  The conversation began wandering back into our own day-to-day lives and Kevin related how we'd found ourselves so reliant upon community when the landscaping truck broke down.  Both of us are still trying to work our ways, mentally, into the shared space of needing people.  There's so much latent individualism lurking in the recesses of our mind.

Our friend shared an exchange that happened with her CSA a few seasons ago.  An older Italian farmer was in attendance-- like real farmer-- she clarified.  Not a young urban bearded dude in flannel, but a man with broad hands and a history in land.  The collective was sitting around discussing building community.  They talked about a variety of events they could host to get to know one another, projects they could take, duties they could share.  The Italian farmer scoffed and voiced his lone opinion for the night: "That will never work.  You only have community when you need one another."

At the time, our friend, a Left-y historian with a focus on class, took this as eye-rolling at middle class liberals.  We began discussing his point in the context of our truck incident.

Community is built out of need.

Kevin & I have floated the idea of not having certain tools that we use regularly & instead sharing with a neighbor.  And reciprocating by purchasing something they might borrow from us.  Not an unheard of practice-- many communities historically and throughout the world either pool resources or are comfortable with sharing.  Kevin & I often resist this for probably the same reasons many others do-- it's more convenient to have you own thingamabob ready when you want it & it's much simpler to not worry about caring for someone else's precious doohickey.

On the one hand, Kevin & I care for our belongings & make them last.  We don't purchase a lot of physical stuff-- we're more likely to purchase an experience, like a concert or a meal out.  However, we're hard on stuff.  And it drives us nuts to have something loaned be returned in a lesser condition.  We don't want to be bad-mouthed (yes, like we have at times bad-mouthed others) so we get nervous about borrowing.  So nervous, that when we do borrow, we often will try to return the thingamajig in better shape than we received it.  This might be a good practice & make us look good, but it's time-consuming, and ultimately makes us both want to be more isolated, less in the network of sharing.

We're working to just be more transparent.  And to not be so scared of work.  Maybe our fear over disappointing someone with how we care for their whooziwhatzit will make us stronger, more mindful stewards in multiple areas of our life. 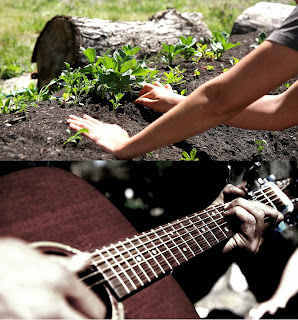 But this is all very mild need.

We've all heard of communities forming and bonding in times of crisis.  There's nothing like shared experience to unite people.  But you can't impose that & we don't wish crisis upon one another.  And yet-- I think we all crave some sense of belonging & community-- that's why we try to create it again and again.

Is the practice again of just being more transparent?  Not being so isolated?  Letting the impact of life be seen and known so that there's room for others to support?  To share, swap stories, scoff, roll eyes, bad mouth, and ultimately know and be known?  To balance spaghetti on our knees, listen, and learn from one another.
Posted by Maiga Milbourne at 6:17 PM No comments: 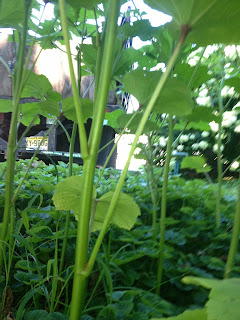 The view from the okra/strawberry patch in our front yard.  I'm falling in love with okra.  It's tall, regal stems.  It's sweet fruit spearing the sky.  The yellow blossoms spiralling open at leaf junctures.  There seems to be a lovely world at the feet of okra.  I imagine myself miniature, strawberry stained feet, eyes reaching upwards to okra blossoms, to life climbing.

I'm getting back on schedule.  Expect more frequent postings here.

I've even gotten fall seeds in the ground!  I was late to it, so warm footed plants went into the hugelkultur beds.  I'm hoping their internal heat might extend the cold crop growing season.  I may also experiment with some cold frames this year.

Nails are painted to mask the dirt beneath.  My cuticles are ripped up as I refuse to plant with gloves or a trowel.  I like to dig my fingers deep.  Let work be tactile.

Here's some of what I've been upto:

And wandering through the garden.  Building fires at night so that I wake with smoke-scented hair.  Rubbing my fingers on rosemary, persimmon leaves, feeling the soft underbelly of a tomato stalk.
Posted by Maiga Milbourne at 9:45 AM No comments:

Recently, many things happened that weren't supposed to. 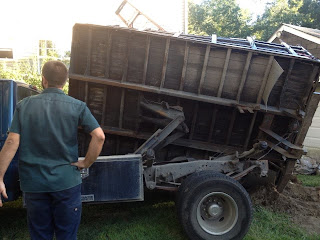 My husband thought he killed his friend.  Thankfully, his friend was fine. 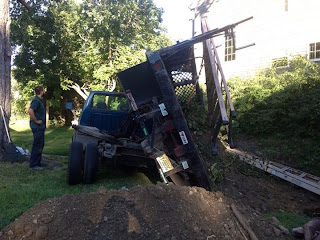 Our small business relies on this truck daily.  We were in the middle of a job & booked through early October.

The net result was that we relied on friends.  One friend loaned a truck for a few days so we could try to stay on schedule.  His truck wasn't the size of Kevin's, so then we were able to borrow a second truck.

Then that truck broke down.

Our neighbor has been a miracle.  He helped us rectify the original mess within ten hours of the event.  He then helped us repair the loaner truck.

We're seeing that our plans are less important than being present, calm, and in community.  I'm also learning that sometimes things have to get all busted up to then get clear.

I'm teaching yoga classes this month dedicated to the practice of Bhakti, loving devotion towards the Divine.  A fellow teacher said that Bhakti is often associated with Shiva, a holy representation of destruction.  I sat with that & tried to work out how destruction can be in keeping with loving devotion.  And then I observed my own recent days.  When the things I thought I needed-- a truck, a schedule, savings, what have you-- were suddenly blown up I had to devote myself to what is less tangible & more reliable-- community, vulnerability, trust.  My faith in the less tangible has grown immeasurably.  Kevin & I keep wanting to write country songs, but less plaintive and more grateful.  We're realizing what aspects of our life we try to shield and where we isolate ourselves.  We've been forced to be more transparent and connected.

When things fall apart there is room for something else.
Posted by Maiga Milbourne at 2:11 PM No comments: