Yogawood Retreat to Vermont: Change is the Only Constant

About a year ago, Beth and I booked Good Commons for a Yogawood fall splendor Retreat. When thinking about the thematic content, Beth blurted out: "Change is the only constant!" So true, and so readily apparent in the glory of fall. 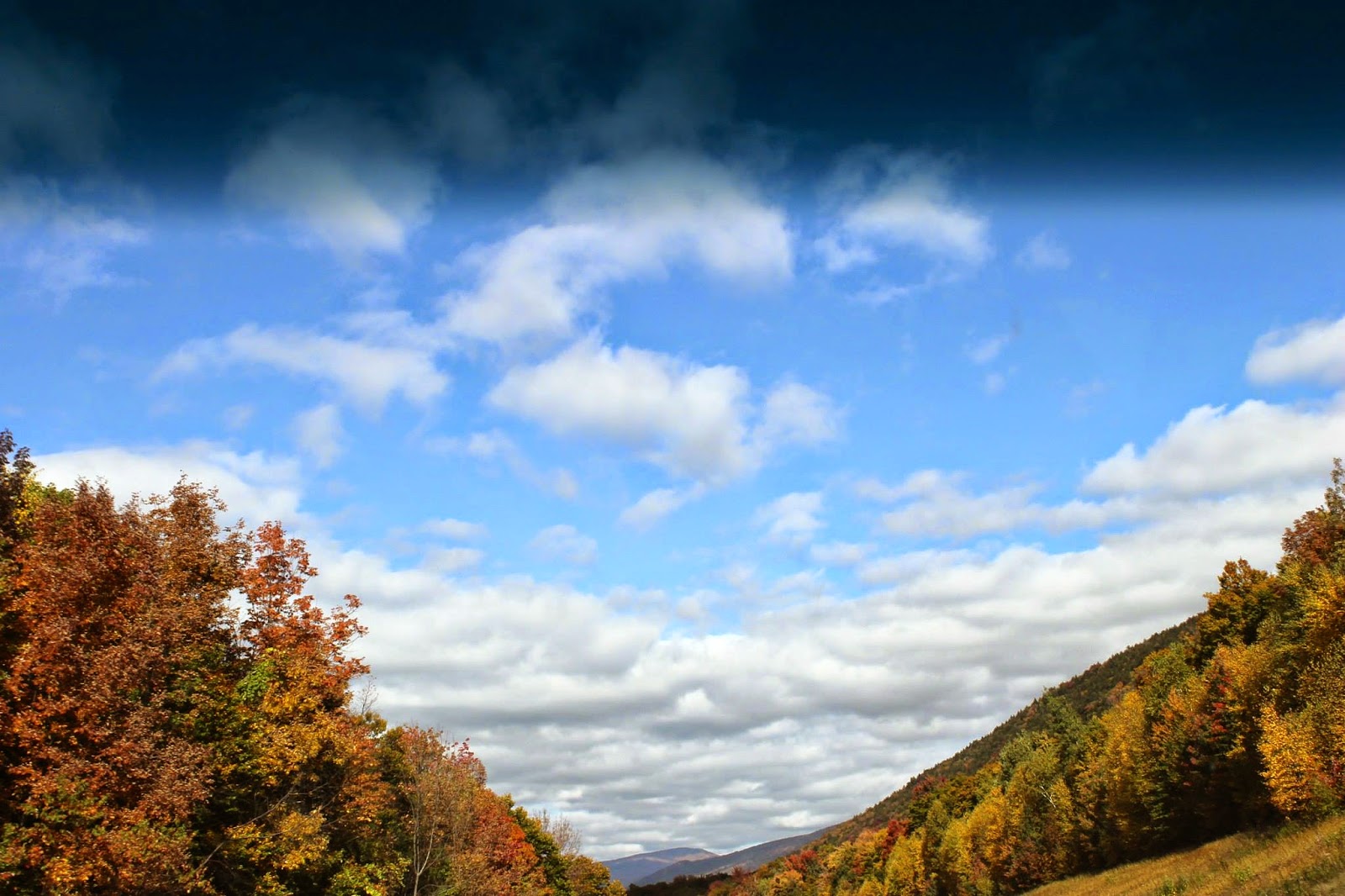 The retreat quickly sold out and developed a waiting list. Our group coordinated carpools up to New England. 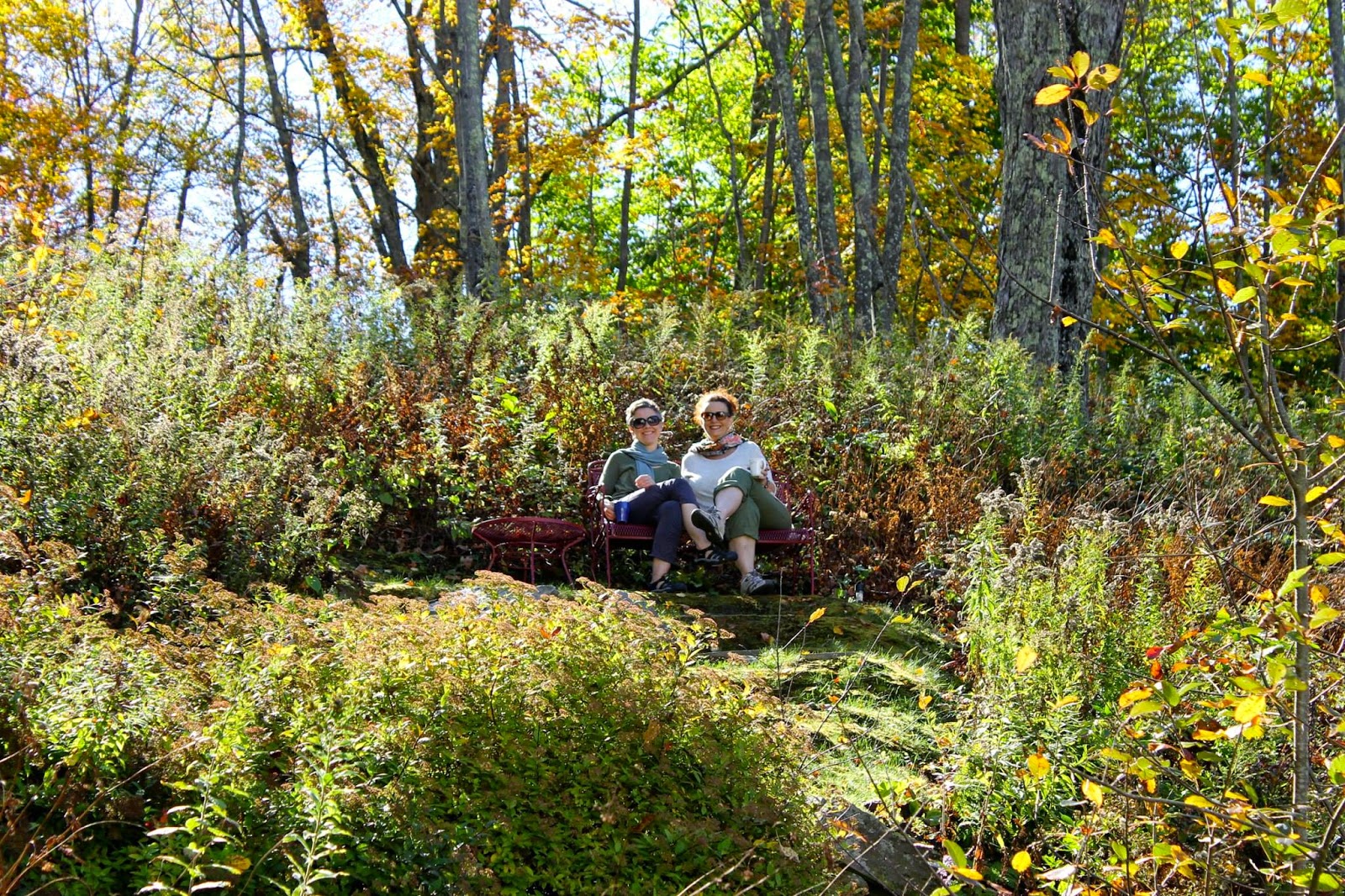 Behind the creaky old farmhouse, owner Tesha Buss landscaped a meandering path through the ferns. Beth and Susan took it in with a cup of coffee. 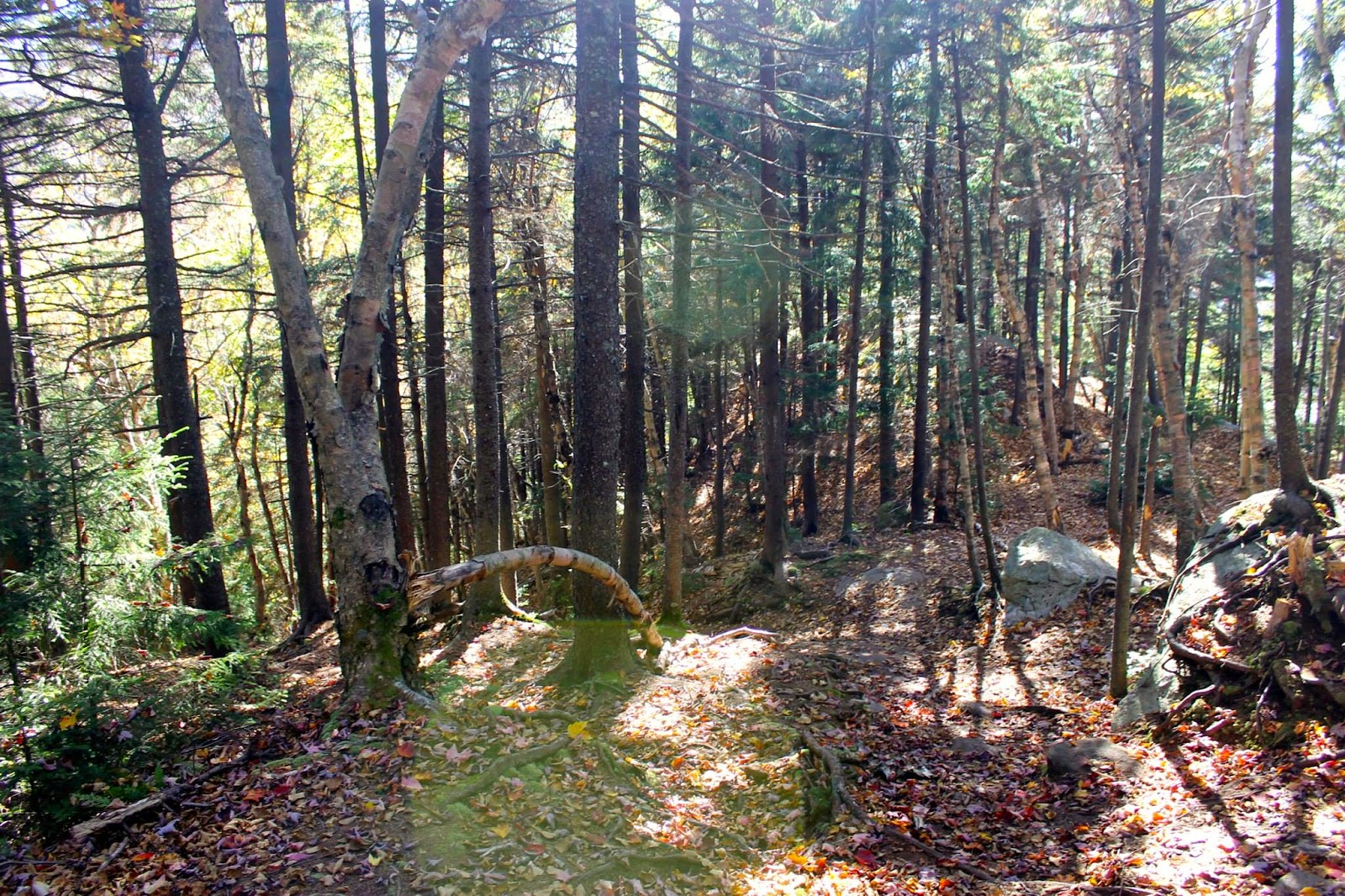 The retreat opened with a yoga to shake off the travel and a great meal. The first full day was sunny and luxurious. After morning meditation, yoga, and then lunch, most of the group decided to hike Deer Leap. 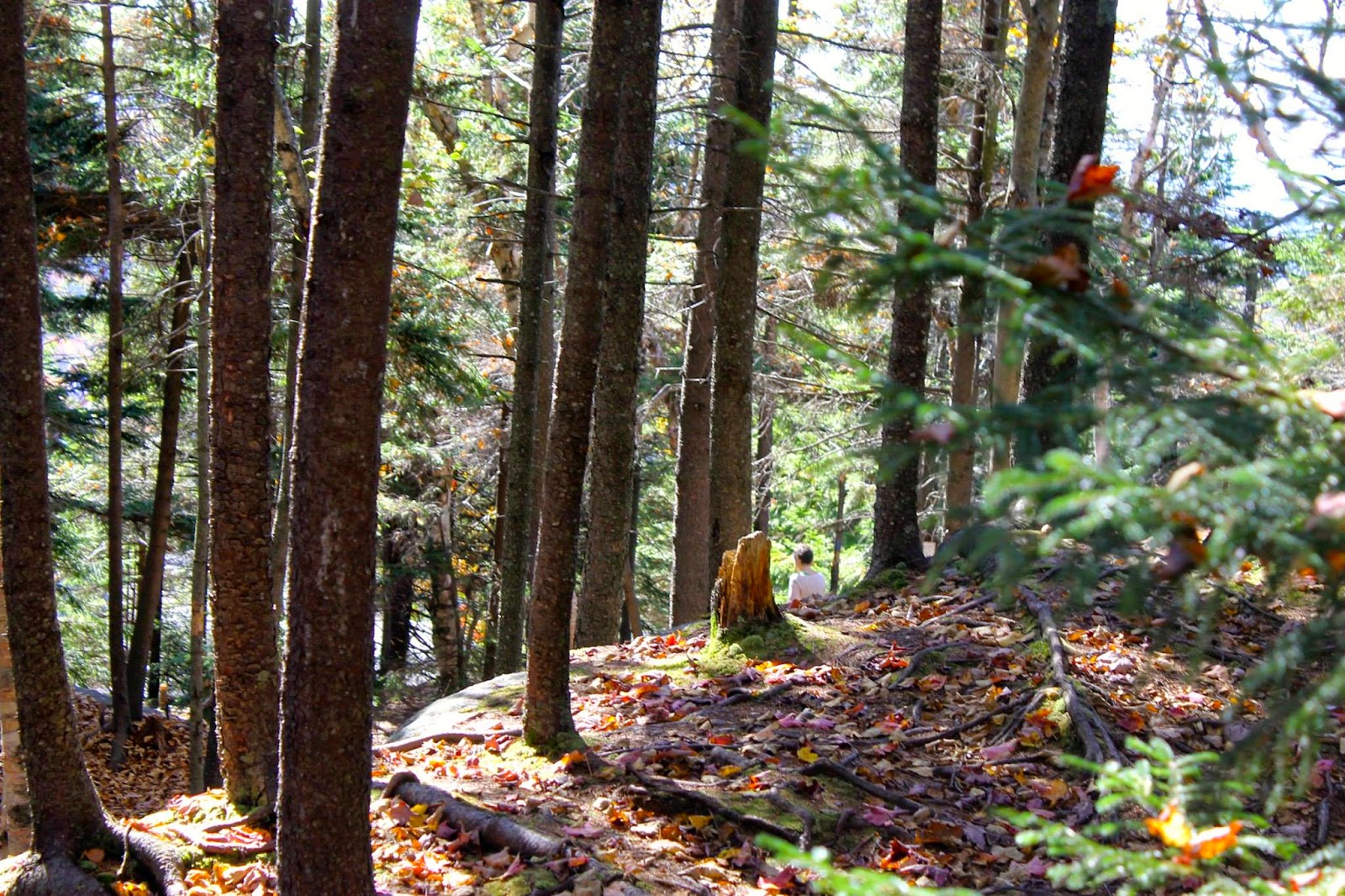 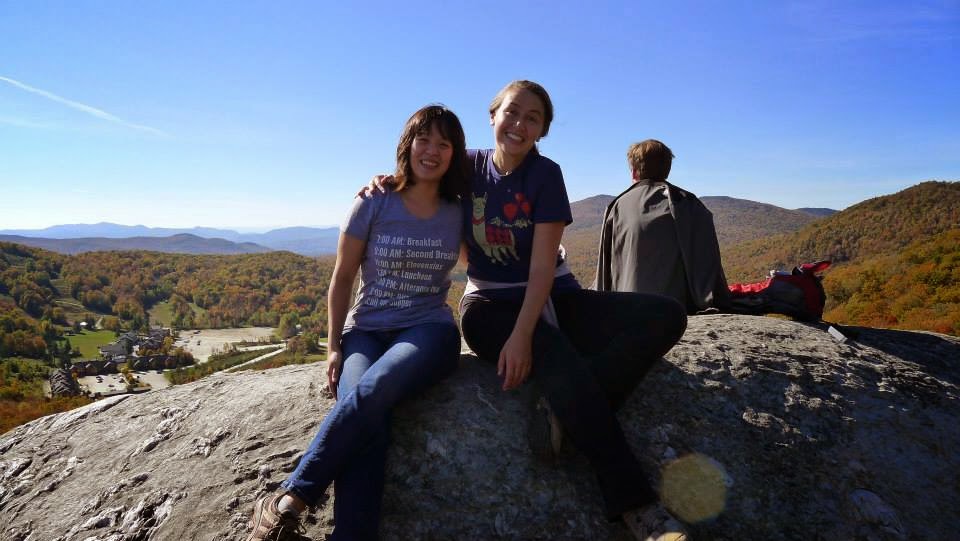 As Tesha put it, the summit offers the most bang for your buck! 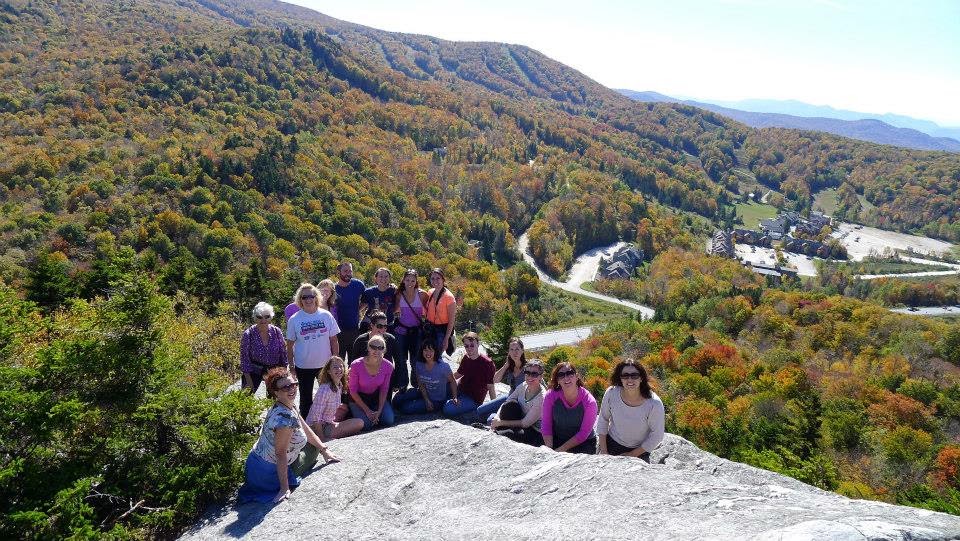 Saturday was rainy and steel grey. I actually loved it. 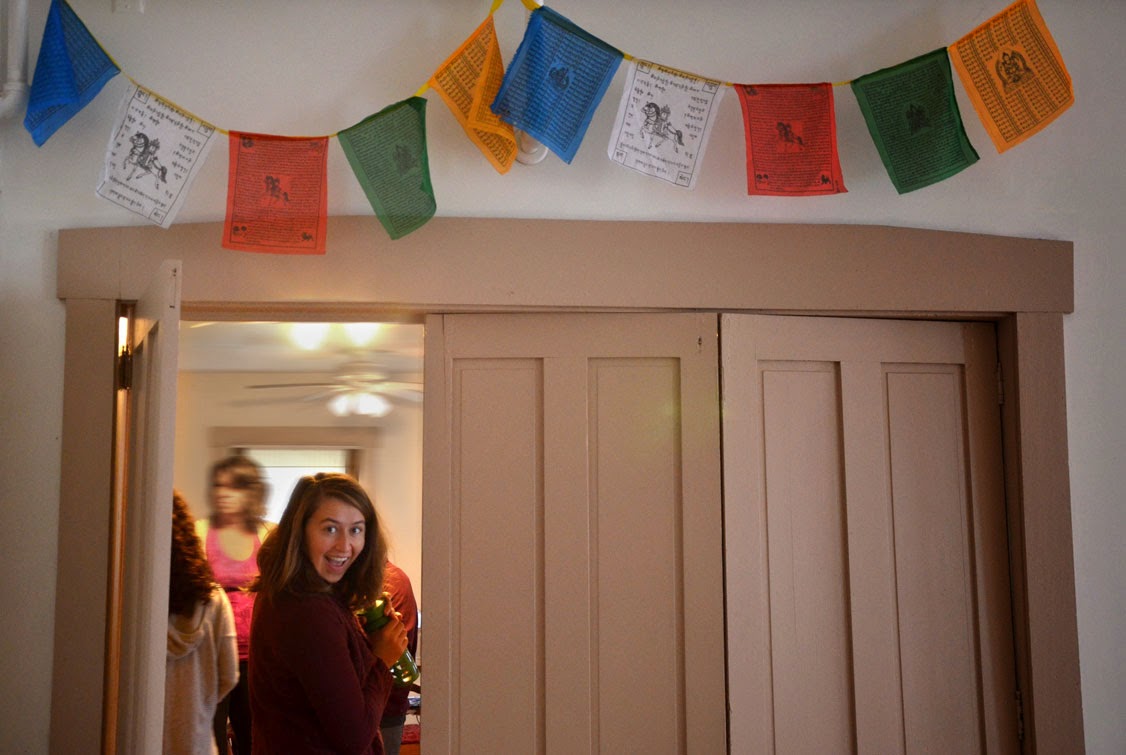 Obviously. We practiced silence on the second morning to offer up more space for reflection and presence. When we did reintroduce our voices, it was with awareness that presence is really our best tool to be receptive to constant change and motion. 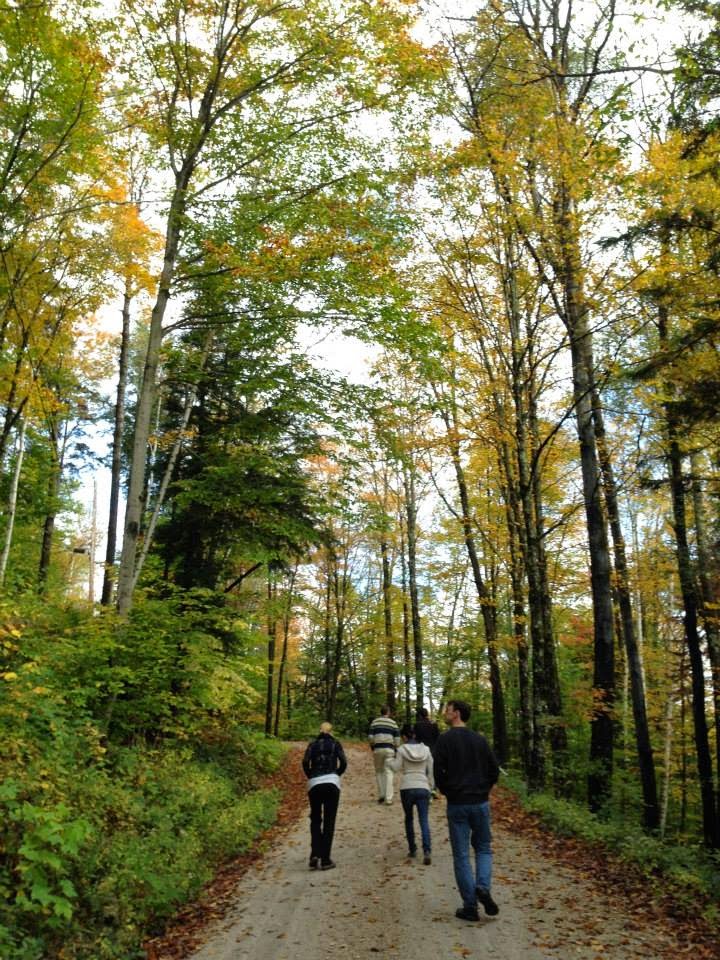 Before driving home, some participants took a morning walk. 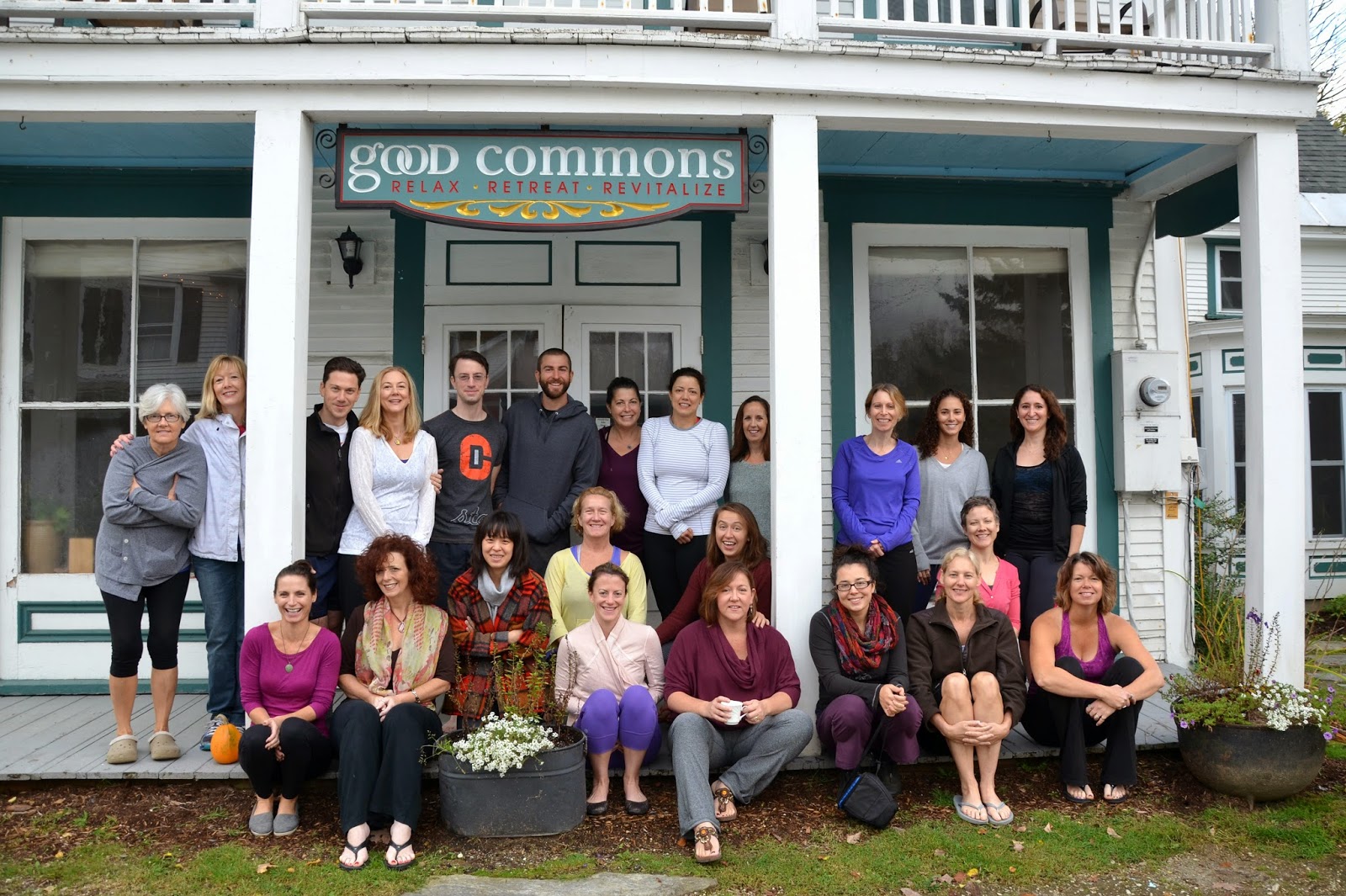 And we had to hug and giggle with each other a ton. 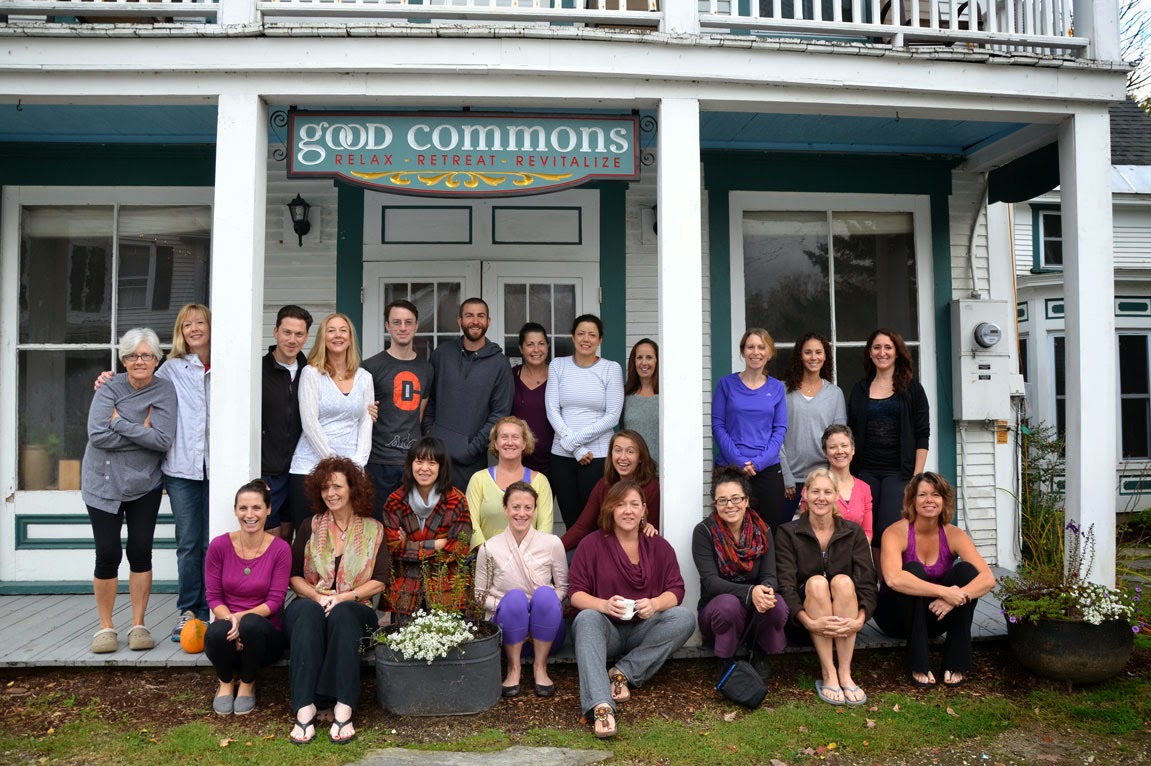 Given the response, it seems fall in New England serves! That's the goal of these retreats-- to create a pause in a place that feels meaningful. I'm already hunting for 2015!

Posted by Maiga Milbourne at 8:45 AM No comments:

I'm thinking a lot these days on how political awareness relies on emotional capacity. As a white woman who works to be accountable to my own white privilege and an ally against racism, I have a lot of conversations with other white folks about race. Probably not as many as I should have. It's exhausting. But, not as exhausting as being constantly assaulted by racism. So.

Thankfully, many of us have many friends. (However, white folks are statistically more likely to be friends with mainly other white folks.)

Unfortunately, many of us grew up under challenging conditions.

I think it's safe to say that we all have prejudices and preconceptions. I don't think it's possible to have not been influenced by your parents (wonderful though I'm sure they are), teachers, religious leaders, and the media. Depending on who you are, where you were raised, and when, the messages might not have been about a black/white dichotomy. Were your raised in Colorado? There was likely more messaging against Mexicans and Indigenous people. Were you raised in the Dominican Republic? There was likely more messaging against Haitians.

I'm learning from some friends of color (there I go!) that some type of internal setting or resiliency told them at a young age that they would not be liked or respected due to circumstances beyond their control. While this is true of all of us, this is extra true for people of color in the United States. It is simply a fact that there will be judgment and differing levels of access for a person of color in the United States.

Some white folks have this too. Some white folks know that they might be judged or limited due to forces beyond their control. I'd wager women have experienced some level of this. However, when it comes to race, there is a quick defensiveness. "I want to be RIGHT here," I'm NOT a racist," "I am INNOCENT," "I get a PASS because of my friends or upbringing or..."

I want to. I want to because I love a lot of people who's experiences are outside of my range for any number of reasons. There is a lot that's outside the scope of my understanding and I'd like to be OK with that. I'd like to be sufficiently emotionally stable for everything to not be about me.

Maybe that's the crux: part of white supremacy and privilege is centralizing white experience as the norm. Can we all be sufficiently comfortable with not being centered? Is there a way we can fortify for ourselves and those closest to us a sense of wholeness and care that leaves sufficient space for others?
Posted by Maiga Milbourne at 6:00 AM No comments:

If you follow this blog, you know it sometimes comes in spurts. My work is seasonal. I find myself in time crunches and then with space. When I get breathing room, I'll sometimes write a chunk and schedule posts to be published in advance. This post was written on Sunday Sept. 14, 2014. Today, it's been well over 30 days since a cop shot Michael Brown in Ferguson, MO. In the intervening time, like so many of us, I've watched, I've supported activist campaigns, and been surprised at my own unending shock. Why be shocked that Black men are being hunted? Hasn't that been the case since Black bodies were brought over the Atlantic as slaves?

And yet, I keep hoping for more. As a white woman, I keep hoping to see white people, white government officials, white police officers behave as humans. Recognize the humanity of Black people, like Michael Brown, and now his family rightfully demanding accountability.

Instead, on Facebook, I read white friends begging for patience and understanding for the police.

I read Black friends expressing their fear for their children's survival.

So much has been written and well. There have been multitudes of compelling articles, particularly by authors of color, writing about experiences of white friends not believing the police harass or that racism is real and current. And I keep wondering, what will it take for white people to get it?

Evidence amply demonstrates the brutal, fatal, murderous reality of systemic racism. Obviously, that's not enough. People operate from emotion more often than fact. What do white people have to *feel* to absorb the reality of Black experience?

I think that white people are feeling fear. And it's absurd, because the reality is that white supremacy and racism is creating TERROR for people of color. But isn't that often the case? The abuser lashes out over fear. The United States, harbinger of international power, militarily intervenes due to fear (founded or likely not). I think white people fear respecting people of color. I think white people fear that accountability means acknowledging slavery, lynchings, and the on-going incarnation of racism in our grandparents, parents, and ourselves. I don't think that white people know how to reconcile these horrors in people they love let alone themselves. I think this is the political and personal work that we have to do to evolve.

I'm grappling with a lot of latent fear myself and finding where it limits me. The antidote has surprised me: it's loving myself. The gentler and more patient I am with myself, the less I fear being vulnerable, intimate, and exposed. This kindness is asking me to be stronger and more self-confident.

I don't know how to enact this type of emotional work on a national scale. I hear that it sounds woo and perhaps a bit weak. Maybe it is-- there's a strong chance that I'm absolutely wrong.

I am invested. I want hope for myself to be a different presence. I want space for the people I love, many of them people of color, to feel safe and seen.
Posted by Maiga Milbourne at 6:00 AM No comments: