Leaving Portland, Maine a few weeks ago, Kevin & I tried to anticipate when we'd be ready for dinner. Based on growling stomachs around Rye, NY on the trip up, we estimated somewhere around Hartford, CT. I went to college in Western MA so I'm well aware that 95 in Connecticut is somewhat of a mess. In fact, CT into NY is sort of a buckle-up-and-plow-through stretch. We asked our friends & Portland hosts if they had any ideas about scoring a decent meal in Hartford. A few texts later we learned there was a well reviewed falafel joint!

After detouring to Emerson's house & Walden Pond, we were indeed hungry entering CT. Thankfully, Tangiers is not far off the highway. They were in the process of moving when we visited, but their current incarnation was a Middle Eastern market with a diner-style counter. It was impeccably clean! Neatly dressed brothers made every order in front of you. Grab a cool drink from the refrigerator, shoot, go grocery shopping while you wait!

Kevin & I ordered an assortment of treats from the menu. Our counter neighbor turned out to have an El Salvadoran husband. We swapped travel stories & exchanged information.

It was still kind of his Birthday weekend.

So, bellies full, we drove a bit down the same road to the well-labeled and expansive Twain estate. It was after hours and closed, but the grounds were easily accessible.

I'm sure a tour guide would help to understand the history of the place. With Kevin, I think the probability is high that experience is in our future. You can sort of see that the building looks a bit like a Mississippi steamer. Or does it? Are we projecting "Huckleberry Finn" onto Twain's digs?

Regardless, lovely hill for a roll.

Turns out Harriet Beecher Stowe was Twain's neighbor! Dang. The force is strong in Hartford.

I promise to no longer be snarky about Connecticut. Connecticut has Twain, Stowe, and falafel. You can stay.
Posted by Maiga Milbourne at 11:25 AM No comments:

After Kevin's recent Birthday adventures in Acadia, we slowly drove south to home. We had noticed signs to Walden Pond headed north days before and Kevin could hardly contain himself. It was his Birthday month, so we detoured.

Thankfully, there's GPS and iPhones and stuff (sorry Thoreau) so we quickly passed Emerson's house (closed, bummer) and heard Alcott's house was nearby too! Concord rolling deep. We found our way to Walden Pond and it was PACKED. And felt a bit like an amusement park in the woods. Minivans unloaded picnic gear, kids raced by in swimmies, tired parents carried bags stuffed with sunscreen. Wha...?

Kevin gave due reverence to the short statue of Thoreau in front of a mock cabin.

Across the highway, lined with more minivans waiting to enter, were marked-ish trails. We began following the one towards Thoreau's actual cabin site. Soon, vistas opened up:

Pond? New Englanders and their understatements. I heard some statistic about Walden and something like Massachussetts' biggest (widest? deepest? something-est?) fresh water lake. Right! Lake. Pond?

Hence the swimmers. Near a lifeguards stand, public bathrooms, and beach, tons of kiddos. Further around the pond periphery (they've got me saying it too) fisher folk and even further, young folks getting their grope on. And the intermittent couple reading in the shade. Folks did seem learned. Being Massachussetts and all.

A group of what struck us as Boston college kids attached themselves to our heels. They too were seeking Thoreau's actual cabin site and had also gotten lost. Lost is a bit of an exaggeration-- child shrieks could orient you, but the trails were certainly not well labelled. Kevin started hypothesizing about Thoreau's aimless walks and how the design was meta. Whatever. I generally have a good sense of direction, the college kids were making strange allusions to "Alive," so I got us there.

Here, pilgrims. Men sat philosophically on rocks. The site itself is underwhelming except for the sunlight highlighting the exact spot. This was a place for the true believers. You almost couldn't hear the kids splashing each other.

Of course we had to exit through the gift shop. The punk rock shop keep confirmed that in the summer, most visitors are swimmers. "The real pilgrims come in winter." Kevin nodded. His people.

In conversation, we found out that a fellow shopper was from Harrisonburg, VA and friends with Kevin's cousin! What?! White boys with a penchant for transcendentalism meeting at Walden Pond like this? No!


I only suffered slightly with Thoreau trivia on the ensuing drive. We had elected to stop in Hartford for dinner. And then we found Mark Twain's house...

To be continued...
Posted by Maiga Milbourne at 6:00 AM No comments:

Recently, I answered for myself the age old question of what happens when you take off a stabilizing boot on a 5-week old foot fracture and rock climb?

It hurts and you're scared but it's really fun.

Once you go Keens you never go back.

Thankfully, the way down was way easier and significantly less vertical. And it included stripping down to our skivvies to swim in the bowl. Good things.

Posted by Maiga Milbourne at 6:00 AM No comments:

This is what happens when adorable Luddite-humans ascend a beautiful peak in Acadia: they take selfies.

I was happily napping and reading at Jordan's Pond. My healing fractured foot was happy I had not ascended too.
Posted by Maiga Milbourne at 9:44 AM No comments:

I was profiled in SharpHeels for travel & yoga retreats! Yeah, the image they used is me practicing sirsasana in the Galapagos Islands. Super fun. Dragon looking lizards stared at me and made me contemplate my own species' extinction. Deep. 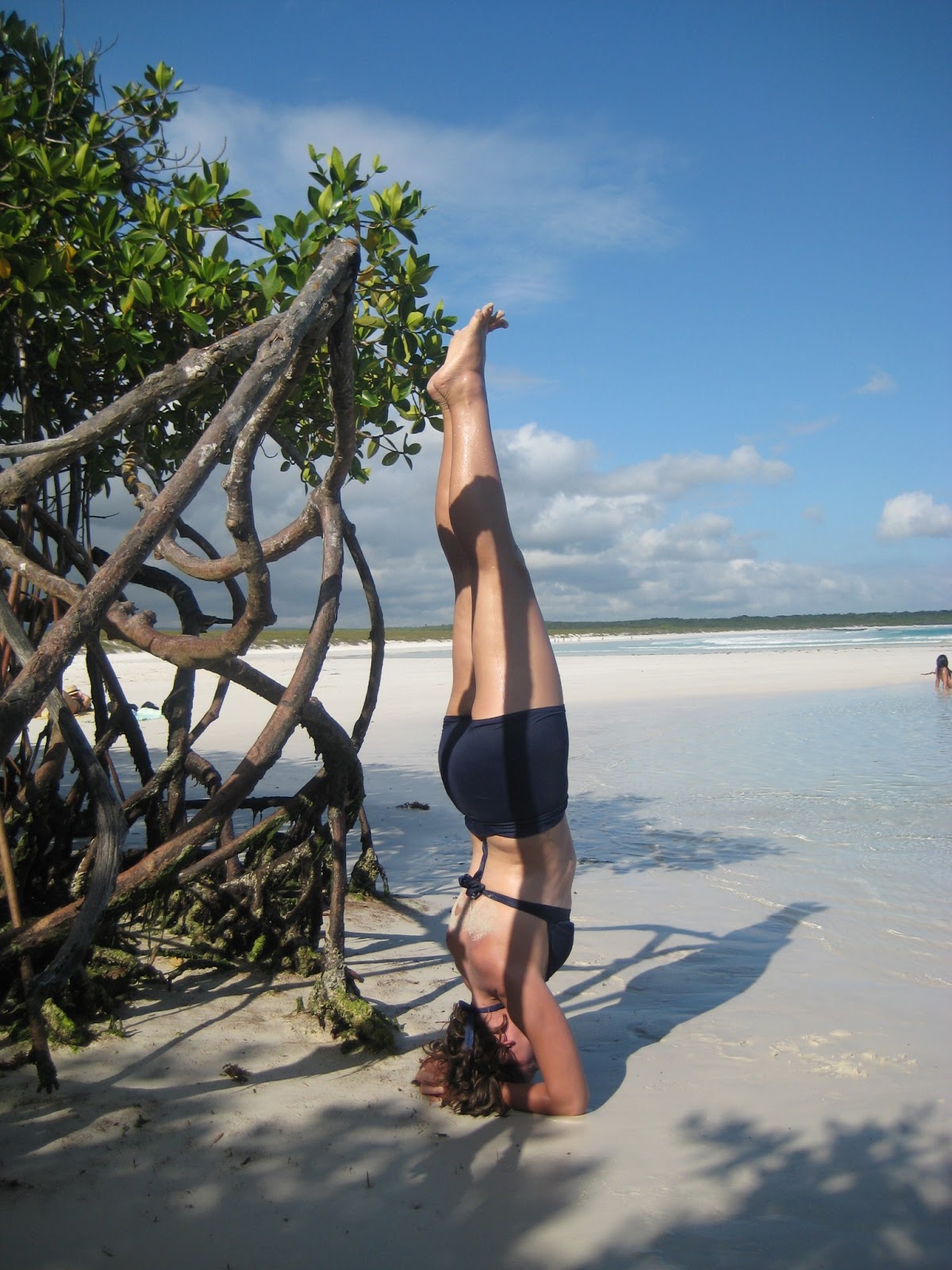 Posted by Maiga Milbourne at 12:38 PM No comments:

Friends from the #GrowFierce reading series created a new journal, Typoeticus. Read on to find my submission as well as many other poems by fabulous females.

Posted by Maiga Milbourne at 1:35 PM No comments: