The heavy: weeks 38 and beyond of pregnancy

All in all, being pregnant with Twyla was pretty sweet. My body seemed to respond well to the hormones and shifts of pregnancy and-- most importantly-- I wanted her, I wanted to be pregnant, so mentally and emotionally, I adapted to the changes more willingly. While there were shifts, documented in other posts specific to various trimesters, it was pretty navigable.

And then week 38. It was kind of overnight. Everyone said at a certain point you won't want to be pregnant anymore and I thought, "Nah." And then I woke up and thought, "Oh." Walking through the world with a full grown baby in me elicited constant, "are you ready?" comments from friends and strangers. The truth was, "No." Every option was intense-- staying pregnant meant more nights awake on the couch, staying upright because anytime I laid down meant insane acid reflux, trying to find something new on Netflix while I resented Kevin snoring in our bedroom. Labor was its own mystery but obviously not a light-weight scenario. And then, a newborn. The most terrifying option of all!

The weeks of 38 and beyond (I went to 41 weeks) were full. Heavy. Laden. For both Kevin and me. I hit week 40 the day after his students graduated 8th grade and he was officially on summer break. For the first few days of that week, he was so happy to be able to shift his mental energy fully into baby. He made us a screened in porch. He got lots of groceries. There was plenty of readying and nesting.

And then we both got restless. We sat in the baby pool we'd purchased to cool off. He drank a beer. I ate cake.

I'd expend my energy by maybe running one errand per day. Being in the world was so bizarre. Being pregnant already makes you a walking target for unwanted and unexpected advice but being THAT pregnant meant I was eliciting constant birth stories. Lots of "you're lucky! I went early" to "let me tell you how crazy painful my labor was!" Cool. Cool.

Of course, I was grateful to have a full-term healthy baby. I also had no room for anything beyond the lives I was carrying.

Throughout pregnancy, I noticed how much unprocessed material is carried within so many people-- and how any pregnant person can unwittingly become target. I got better at deflecting and redirecting. And I resented having to learn this skill when so much of my energy needed to hold my own experience. I was breathing patience. I was softening into something I couldn't predict nor expect. I was on a constant precipice of radical change, and I needed to just live in that window.

It's strange to live right before you and your life changes unrecognizably. I think the truth is that we always live there, but certain periods make that more apparent and undeniable. Being so very pregnant is one of those seasons.

As much as being that pregnant was not the best, I did not want to rush her labor. I really wanted Twyla to arrive on her own timeline. Human gestation is organic, not mechanic. While there are trends of full-term babies arriving weeks 37-42, really, if allowed, babies arrive when they're ready. I knew there might be certain specific scenarios that would warrant a medical induction, like if the amniotic fluid levels varied or anything like that, but barring those circumstances it was important to me to guard Twyla's birth. I wanted her to initiate. I wanted her to be ready. My work was to surrender to patience and mystery.

My google history was endless, "does this mean labor?" while my text exchanges were fending off about the same from those curious about Twyla's arrival. I felt Twyla's wholeness in every movement. Bending over was a thing of the past. I got good at squats. Trying to get up from being reclined (because laying down was not an option, given the relaxin-induced acid reflux) was an event in body awareness and movement. I became really grateful for all my years of yoga, running, swimming, and other movement practices because they meant that I had more ideas and dexterity to haul myself around.

There were so many suggestions to induce labor naturally. I looked into all of them and did some. From what I can tell, there's only evidence corroborating dates readying the perineum. Beyond that, all the pineapple, sex, spicy meals, eggplant dishes, and the rest are just anecdotal and accidental. I still tried plenty of them. Castor oil may be real, but also induces some of the worst experiences of people's lives. I left that alone.

Twyla continued to prepare me. She adapted me more or less to her sleep schedule on the outside. She made it mandatory that I kept snacks around, though my appetite and ability to eat a full meal had radically decreased (my stomach was somewhere hovering near my throat). She took up all the room in Kevin and my life even as we lived out our last few days without her on the outside. They're the days that leave an imprint because you know you're getting ready to live out the events you'll never forget: the first contraction, laboring with her, how she would be birthed, and beyond.

She created a full space, infused with her presence. We waited for her to arrive, to fill it. 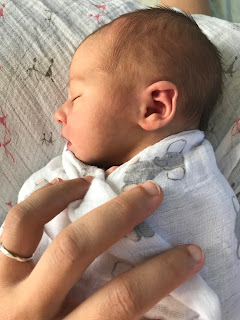 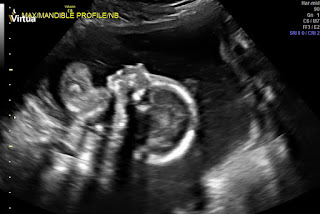 Posted by Maiga Milbourne at 10:08 AM