Early in my pregnancy with Twyla, I heard a Birth Kweens podcast about the Fourth Trimester period during a baby's first 3-months of life. As a first time parent, and someone who hadn't paid much attention to pregnancy and birth until I decided to go down this path myself, the period after delivery completely captivated me. From everything I read and heard, in this period mother and baby seem developmentally in tandem. Both in diapers. Both re-establishing communication with their elimination functions. If nursing (and perhaps if not?) both need to eat around the clock. Both enduring strange sleep cycles less tied to the sun while wrestling with exhaustion. Both finding their body in a different state, geographically, physically, with brand new sensations.

Some East Asian traditions feel that the postpartum period sets the tone for a woman's menopause and old age-- that by active care during this period you establish a stronger foundation for later in life. Intrigued, I began cultivating my own postpartum care.

I learned that in France it is standard care for all women to have at least 10 postpartum pelvic floor physical therapy sessions, no matter how they birth nor how the birth goes. In any birth, there is still a lot of pressure and stress (not unhealthy, but action) on the pelvic floor. The common advice given to prenatal women, at least in the United States, is to do a lot of kegels or actions to strengthen the pelvic floor. I think this is because, logically, when there is so much weight of a baby on your pelvic floor, there's a sense that you need to be strong enough to bear it.

However, most of us actually have really tight pelvic floors. That doesn't necessarily mean strong, but it does mean unyielding. For a woman to fully dilate and birth a baby, the pelvic floor has to be responsive and soften to the birth. I knew through my yoga practice that I fell in the tight camp. Years of active practice and aggressive mula bandha had tightened my pelvic floor. I also learned about a fascial connection between jaw and pelvic floor. As someone with periodic TMJ and teeth grinding, I knew that was also symptomatic of a tight and less yielding pelvic floor.

I didn't want to tear, so I began learning how to soften and open my pelvic floor in pilates, prenatal yoga, and also pelvic floor physical therapy.

This type of physical therapy retrains this important muscle group through external and internal work. In the United States, there are very strict rules about who is permitted to do internal physical work-- usually, just OBGYNs! While that makes sense in theory, it means that in so many ways, the types of touch and the relationships we have with our body are stymied. I didn't realize that until I engaged with the practice myself.

I've practiced yoga since I was 16. I felt like I was fairly integrated and embodied. Knowing that I wanted to do postpartum pelvic floor physical therapy, no matter how the birth went, as a preemptive action to restore my whole health, I found a pelvic floor physical therapist, Dr. Amanda Heritage. We had an initial phone call and saw that we were both very excited about the possibilities both of her modality and how pregnancy and birth can be used as periods to shore up overall health. Dr. Heritage recommended that I do a prenatal visit to ready my perineum to stretch, hopefully rather than tear, during birth.

In our first session, we first talked. I explained some of the "lightening crotch" sensation that I'd been feeling. That's a fun one! Dr. Heritage showed me models of the nerves in the pelvic bowl. I began to understand that I would feel sensation in my legs because my baby was triggering a nerve much higher inside my pelvis and the sensation was referred away. I was utterly fascinated, but also somewhat reassured throughout the rest of my pregnancy.

We then began the actual work. Physical therapy always involves patient action, movement, and integration. Pelvic floor physical therapy also includes bodywork. Dr. Heritage used myofascial work on my abdomen and hips before slowly moving towards perineal work. She taught me perineal massage. With every action, there was conversation and consent.

When the session was over, I felt that I'd had an experience that I didn't yet have the framework to process. That happens from time to time like if I'm in a foreign country where people are living in a way that's beyond my previous conception. It takes time for my brain to catch up to a reality that I'm witnessing. I don't have a file to place what I'm seeing.

I sat in my car and felt that I was in uncharted territory. My impulse is often to numb out by scrolling on my phone. As I've begun recognizing what's occurring in real-time, my current response is to just sit quietly. That's what I did. I sat in the pine shade and acknowledged that I was growing, something was shifting, and it would require time.

By giving myself that allowance, my brain actually does catch up more quickly. I realized that I was stretching into integrating my body in a completely new way. My arm has had a huge history of touch. I've felt my own arm and said, "arm," knowing it cognitively. My arm has been bruised and touched lovingly and touched clinically.

My pelvic floor is a very different story!

I realized that prior to the first session of pelvic floor physical therapy, I had experienced only clinical and sexual touch. This experience felt like neither of what I had previously known. It was clinical touch but at a slower pace and more time for me to make the same cognitive connection of "Oh! That's my perineum." Pregnancy is new, relentless sensation and this was a process of naming and embodying each feeling. The mystery was both contracted and expanded. In a way, it felt more like the friendly touch you would get on a shoulder in a part of my body that had never been dealt with in that way. I realized I wasn't fully living in every part of my body as I had previously thought. I had no point of comparison until my range of feeling and touch was expanded.

In learning about the postpartum period, I learned about many rituals that various cultures offer to this rich time. These rituals often occur in cultures that mark many points in a woman's life like the onset of menstruation, partnership, and menopause.

I imagined if I had pelvic floor physical therapy when I first began menstruating. I wonder how I would have known my own body with that information? If pelvic floor physical therapy was in a way, a ritual we utilized not only in times of distress but in marking new evolutions in our body. What if we used this modality as mapping and a point of integration? Each time the body evolves into a new function and iteration, here is a way to know it and be in it.

I had two prenatal sessions and go for my first postpartum session in a few weeks. I'm living in a completely different body. My current body is no longer pregnant but also still bears some of the space and aftermath of pregnancy. My body is not and will not be what it was prior to pregnancy. It's taking a new form. I'm excited to know it more deeply. 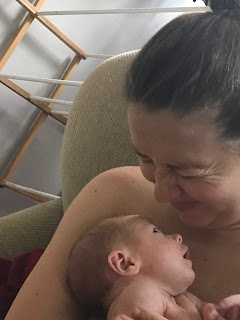 Posted by Maiga Milbourne at 8:55 AM